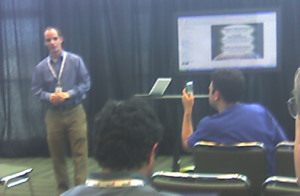 Way back in April – I know, the stone age of recency in today’s hyper-informed world – I went to the O’Reilly Web 2.0 Expo conference. One of my favorite sessions was Michael Wesch’s session at the Web2Open (unconference surrounding the expo). I’m inspired by Web 2.0 post today to represent Michael Wesch’s decidedly poetic take on Web 2.0.

Disclaimer: Parts of this blog appeared previously inside the firewall of SAP. Finally, the “Mario Herger” inside my head went off, saying “Why not post this to the SDN instead of keeping it inside?”  Plus, it’s my daughter’s birthday, and I can think of no better message to spread for the day than the message of Michael Wesch.

From Cultural Anthropologist to Web 2.0 Luminary

Michael Wesch is the Cultural Anthropologist from Kansas best known recently for making the YouTube smash-hit video Web 2.0 … The Machine is Us/ing Us. Already popular for months, that video played to open up the keynote sessions at the Web 2.0 Expo, and I got to hear Michael share his interesting and compelling story at his Web2Open session.

From his Kansas State University page:

(Wesch) pursued research on social and cultural change in Melanesia, living in the Mountain Ok region of Papua New Guinea for a total of 18 months from 1999-2003… Currently Wesch is launching the Digital Ethnography working group at Kansas State University to examine the impacts of digital technology on human interaction. The first outcome of this work was a short video called “Web 2.0 … The Machine is Us/ing Us.” The video was released on YouTube on January 31st 2007 and quickly became the most popular video in the blogosphere and the #1 featured YouTube video on February 7th 2007.

He took us through his video and explained what he was thinking when he created it. For instance, in the beginning, he was trying to build a contradiction in saying “Text is linear… unilinear…”

He said he was studying in Papua New Guinea when “Web 2.0” “launched.” He was interested in digging down into the past – the archaeology of the Web, as it were. “HTML was very rear-view mirror,” he said, citing the quote “We march backward into the future.”

His perspective offered a basic and elegant way of explaining the “Web 2.0 phenomenon” – “What I thought was important about Web 2.0 is that XML pulls apart form and content.” What’s profound about this is that it gives everyone a chance to publish their content, without worrying about the form, he explains. “It takes only 19 seconds to create a blog,” he found – to actually publish your thoughts so the world can see – and he finds this amazing. (In the video, he laughed, he condensed this to only two seconds).

After he posted it to YouTube, he was totally caught off guard by its success. He was thrilled when he and his wife kept pressing “refresh” at home and saw the video crossed the magic “100 views” number. But it went way beyond. It took only one week for his video to skyrocket to the number one featured video on YouTube. Nowadays, in his hometown in Kansas, the local newspapers (that wildly misunderstand his video, he says) write often about their “celebrity professor.”

The Backstory on the Music

In fine Web 2.0 fashion, his story doesn’t stop with one medium – video – or even two media – video + blogging. For the video’s soundtrack, he borrowed (via Creative Commons license) from a guy who lives on the Ivory Coast whom he never met (“There’s Nothing Impossible” by Deus). Michael tells the story about how this man was going to have to give up his dream of making music due to lack of resources. Now, with the popularity of Michael’s video, people have been donating money to this man, and his dream of making music is alive again.

At the end of the video, he lists all sorts of ramifications of Web 2.0 as things we’ll need to rethink, such as privacy and security. The one he’s asked about the most is “Rethink Love.” He took a moment to explain.

We’ve come a long way from arranged marriages, he said, shifting from there in around the 1600’s-1700’s. It’s therefore conceivable, he continues, that we’re in the middle of a shift there as well.

What strikes me the most from both Michael Wesch and the Web2Open sessions in general is how important diversity is in the globalized world – Web 2.0 or otherwise. Diversity comes in many forms, and vocational diversity is an important oft-overlooked one. Often it takes someone outside of a particular field to illuminate it the most. In this case, Michael cast an anthropology professor’s (and I might add, a poet’s) eye to synthesize something that has become a common market for many of us these days. In doing so, he treated us to a fresh perspective that obviously resonated as it took off.

Michael Wesch provides us with such a rare view, approaching the divine, into the new and even the mundane, and I submit that this is the real key to — call it what you will — “Web 2.0.”

PS: The Web 2.0 Summit approaches. Stay tuned for posts (and twitter? and certainly flickr) from me about this complimentary O’Reilly conference. I’m excited to see Caterina Fake, Evan Williams, Meg Whitman, and all the rest…

Marilyn Pratt
August 29, 2007 at 1:34 pm
Your postings internally way back in April/May helped me position Michael Wesch's video in an ASUG keynote I presented so I doubly owe thanks to you and to Tomas.  So now I will dig back into a promise to recreate the content around Community Evangelism and Web 2.0.  Thanks for the inspiration Moya and Tomas.  You waxed poetic as well.

Moya Watson
Blog Post Author
August 29, 2007 at 5:48 pm
high honors, coming from you! will look forward to seeing that content as it evolves.  here's to michael, the original inspirer!

The link to the complete video, though is here

thanks so much for posting that "Final Version" link. i just watched them side-by-side to see if i could spot the differences.  the "Final Version" is two seconds longer... the differences are subtle. one biggish one is that instead of the "some rights reserved" copyright at the end of the first one, he uses creative commons copyright in the second one.
clearly the first link is the one that is more propagated: 5941 (!) comments, vs. 359 on the "final cut." both links still have plenty of fresh commenting to this day. what a phenomenon!

so thanks again -- and i will correct it above so we propagate his final one.  for reference, here's the link i'm removing:
http://youtube.com/watch?v=6gmP4nk0EOE

Michael Biermann
August 31, 2007 at 6:37 am
Thx for the Video Machine is Us/ing Us
It is really wonderful

Have a look at some more videos regarding future visions:

thanks for your futuristic look!

for our post-firewall friends -- michael's links:

http://epic.makingithappen.co.uk/new-master1.html - fascinating look back into the future ... it's 2007 - we're waiting for Newsbotster! Google and New York Times square off in a "new" future world of news... taking us all the way to 2015.

ps: i was happy to find someone posted a video of michael wesch's web20pen session - the very one i saw: