The need for this approach :

Sample Scenario with Multiple Levels of data for a flat File:

Let us consider a case in the below shown structure is the data format in the target side.

And the required file is of the format shown below.

The general approach here is that level 1 can be viewed as header and Fields in that level are the header fields and Level 2 is item and so on. The requirement is that we would have to show the header fields in one line and then its corresponding items in each of the following lines with the corresponding sublevels following the items. Basically a running list of header and its items, subitems and then the next header and so on.

This cannot be directly achieved as the file content conversion will not allow us to use more than one level in its content conversion. The following steps need to be done in order to be able to convert this structure into a flat file.

Whatever the target structure is create another data type as a copy of this structure and add another field of type string in the end and at just one level below the root node as shown below for the example we are discussing.

Note that this data type contains all the fields as required and then one field labelled “Result” in the end and just one level below the route node.

The above type will act as the intermediate structure. Declare another structure with just a node and an element within it as shown below. This shall be the final structure that would be used for the Content Conversion.

Creating a message mapping between the actual target structure shown and the intermediate structure (with the extra field in the end) shown above.

This mapping requires declaration of 2 global variables as shown below.

The source field 1 and field 2 are from level 1 and the target field 1 is also from level 1. The user defined function “gen_flt1” would contain the following code.

The following needs to be noted about this Function

Repeat the same procedure for all the levels. The same function can be re used if the number of fields in each level are the same, else use the same logic and create new function for every level.

Note that the result field does not map to any source fields, instead it is mapped to another user defined function “Populate_Result” . This function would contain the below shown code.

The following needs to be noted about this Function

Once the mapping is completed, check is as shown below to get the desired result.

Create another mapping between the target structure above and the final structure if the flat file.

The mapping only involves 2 simple steps shown below 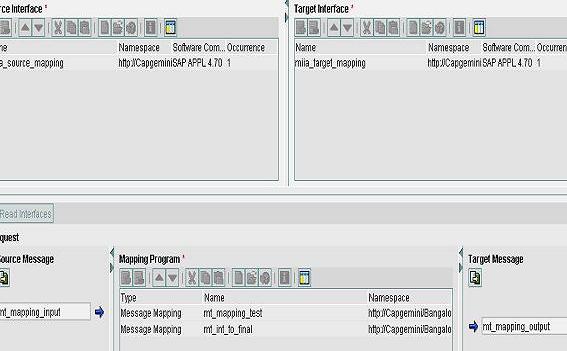 The mapping can be checked as shown below.

The Target structure thus achieved is same as the one recommended to be used in file content conversion and hence the Content Conversion is now direct. Even though the target has “n” number of fields in each line, since they are concatenated, the field list in the conversion parameters would contain just one field “Result”.

This logic can be used to convert any hierarchical structure with any number of levels and elements in each level to a flat file by using the standard development tools in XI. The logic also takes care of differences in occurrence between each of sub levels that usually complicate the mapping since Node Functions would have to be used. The content conversion which is very complex to handle even with one hierarchy would now be simple as all the data is in just one field. Any of the separators can be used and file can be generated as fixed length also. Newer fields added to the target data also can be accommodated in the mapping. File Formats with variable alignment based on the hierarchy as shown below can also be achieved, but just concatenating more tab spaces in the UDF “Generate_Flt1”. 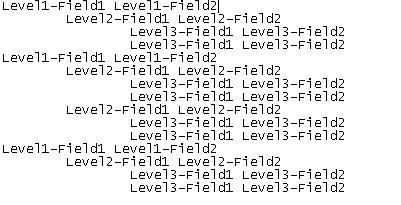 Former Member
August 26, 2007 at 10:13 pm
Hi Karthik,
when a deep structure must be converted into a flat structure. SAP provides the node function useOneAsMany to solve this problem (see for example this help). Even though this is a very useful function, it still has some limitations.
Also mention relevant weblogs
Replication of Nodes Using the Graphical Mapping Tool
http://help.sap.com/saphelp_nw04/helpdata/en/38/85b142fa26c811e10000000a1550b0/content.htm

Former Member
August 27, 2007 at 1:12 am
Thanks Deviprasad! Yeah the node function you mentioned is actually meant for this purpose. But with increasing hierarchy and difference in occurances the function gets more complicated, i had hence given up on that approach and chosen this.There are various methods to achieve flat structures, but i was thinking about a common solution to any type of structure as node function related solutions are very specific and are not applicable even if our strucuture is little different from ones stated in examples.

In Step 2 i.e. Intermidate mapping . if you are havinf flat input then mapping into intermodate mapping i.e. Source strcuture is more diffcult for which we may need to use XLST or Java. can you put that in ur blog

Will this scenario work in file to idoc scenario.
Where I have the same file shown above in the source side and I need to trigger the idoc for each Level-2. And each Level-3 will be the item segment for the idoc.

Please reply to me on my email : harish_jmk@hotmail.com

This is a really nice blog . However I have one question
What if my structure is restricted till Level 2
is that possible without Intermediate mapping?

i.e the target structure that i have to produce for my file is :

is that possible to use produce the same using Content conversion ???

Former Member
February 25, 2010 at 6:23 am
Hi Dev,
I think the primary issue with the reciever side content conversion is it supports only one level.
Check this link.
http://help.sap.com/saphelp_nw04/helpdata/en/d2/bab440c97f3716e10000000a155106/content.htm
It says "The expected XML structure contains the structure as nodes filled with any number of elements without additional subnodes."
So in your example, all the fields must be under level1 without any additional subnodes..
Hope this helps..
Thanks,
Karthik


and then in the intermediate mapping - map it to the structure

how to achieve this ??

I really need ur help

as this post is from 2010 so I hope you had implemented this scenario for such requirement.

Can you please guide?