Disruptions in Critical Infrastructure, although mostly private, or Quasi-Government, immediately impact direct customers, and often expand with tiered effects.   A recent natural gas pipeline attack against PEMEX (Petroleos Mexicanos) facilities prevented natural gas from reaching several customers including Honda Motor Co., Kellogg Co.’s, The Hershey Co., Nissan Motor Co., and Grupo Modelo SA, and amounting to approximately $6.4Million in losses per day, according to the association representing Mexican Industry.   On 13 August in Russia, an Improvised Explosive Device (IED) was stated as the cause of the  explosion against a passenger train in Russia, causing a goverment terror probe.   Even though attacks against these “soft targets” may not have been preventable, the effect of incidents such as these can likely be mitigated through training on known terror tactics, and even sharing or alerting officials to better catalog and make sense of risks.  Typically, the public turns to government to resolve issues like these which affect the public’s quality of life and security.   And with better information sharing between critical infrastructure and goverment, the community as a whole is better able to “harden” infrastructure, and even prevent future attacks. 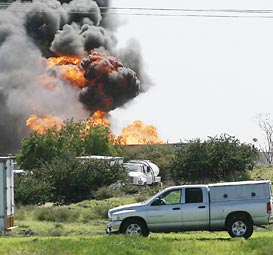