Global trade often means that goods are transported by a number of operators, and some types of goods, like fresh produce and pharmaceuticals, are susceptible to environmental conditions during transport, typically temperature. In this entry I will introduce stations, a mechanism in GTNet for mapping series of environmental parameters against the location of traceable objects. I will use temperatures in examples, but any type of value that is best expressed as a series over time can be used. For example other parameters from the environment like pressure or humidity, or computed values like “risk”.

Transporters may easily be required to provide their customers with readout from temperature sensors. This way the customer can inspect the development of exposure along the chain, and for example redirect products with shortened shelf life to outlets nearby. This way the goods can be sold before they spoil, they need not be thrown away, and the company may still earn money.

Sensors that provide readout can have many forms, ranging from fixed sensors in the hull of transport to RFID based sensors attached to individual products. They may be of different make and they may have different ways of inspecting the data. Unless the data is combined in a single tool, the user may have to relate to multiple user interfaces and know exactly which types of sensors were involved with a particular product item. The station mechanism lets GTNet be this single tool for inspecting data from multiple sources. 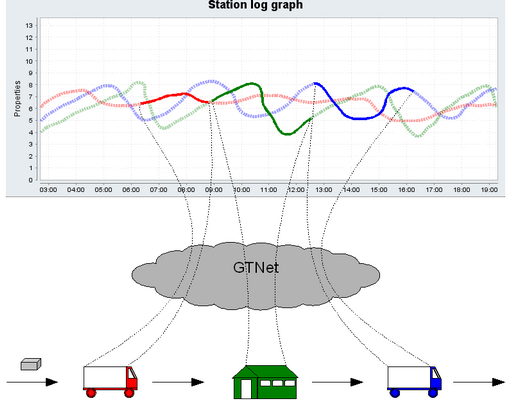 Implementation consists of two parts, temperature readings must be loaded from the sensors, and the movement of traceable entities from station to station must be registered.

The XML above illustrates the template for loading temperature readings. The fields station-name and date-and-time are placeholders for actual values, while Temperature is the name of the property recorded. 3.7 is of course the value of this property. Series of temperature readings would of course need multiple such property lines.

A station is not limited to a single property – one could for example also include geographical coordinates so that the development of temperatures can be associated with the location of the station (truck) at the time of the reading. Then the route of the object’s transport can be illustrated in one of the popular Internet map services.

With environmental readings in place it remains to associate these with goods as they are moved in and out of transports and warehouses. The XML above illustrates the template for this. The source for the EnterStation and LeaveStation would typically be a RFID portal, barcode reader or similar. Unique identifiers on the goods will ensure that independent readings from different sources will refer to the same object, and allow GTNet to sort things out.

As always XML tends to be verbose, but experience tells us that the simplicity of the XML examples above makes it easy to integrate with sensor systems from most vendors.