In both XI forum and weblogs, Sync/Async scenarios have always been a constant. To satisfy these scenarios, several solutions have already been proposed, most of them based on ccBPM. However, sometimes the overall integration performance is a real constraint and ccBPM cannot be used. To address such cases, some solutions have also already been proposed, mainly regarding JMS scenarios. That’s because the Java Message Service natively deals with the correlation between the asynchronous messages, referring to the request message in the response message, by using the JMSCorrelationID header field. Documentation regarding async/sync and sync/async scenarios with JMS adapter may be found in the following link:

Async/Sync and Sync/Async Bridge in the JMS Adapter.

However, in most of the times, the communication protocol is not a development option, but rather a requirement. For instance, consider a legacy system which can only handle files (no API is available) and suppose you want to consume one of its services from a synchronous RFC in ERP system. This is going to be our sample scenario.

Briefly, Async/Sync scenarios are simpler in the point of view of middleware development, since you don’t need to address the correlation between the two asynchronous messages. For example, in a ccBPM approach, you don’t need to create a correlation between those messages, since they are treated in the same logical transaction (the inbound async message is triggered, indirectly, by the outbound one). Since no correlation needs to be handled inside XI, the same logic (and the same standard modules) used for the JMS scenario may be used for non-JMS adapters, for example an File -> RFC -> File scenario, eliminating the necessity of custom developments. This scenario has already been addressed by Bhavesh Kantilal in this thread: File – RFC – File without a BPM – Possible from SP 19..

For Sync/Async scenarios, the correlation between the asynchronous calls needs to be handled in the middleware, and that makes it a little more difficult to be implemented. In ccBPMs, you need to define a correlation to link both async messages. In JMS scenario without BPM, you have the JMSCorrelationID which does the correlation. So, what we need to do is to handle this correlation between the async messages, in order for XI to understand that those messages are linked. For that, we could use the same modules of Sync/Async JMS scenario plus an extra logic to handle the correlation. As described in the thread above, this solution is available from XI 3.0 SP19 and PI 7.0 SP10.

As in the Sync/Async JMS scenario, the repository development simply includes the inbound and outbound interfaces (both defined as synchronous) and relevant message and interface mappings.

In our scenario, we’ve developed a simple sync RFC to request the service to XI and process the response. The RFC definition (request and response messages) may be found below:

Finally, we’ve developed simple straightforward message mappings for the messages above and an interface mapping between the sync interfaces.

This is where the main changes take place. However, most of the changes are as described in the JMS case. But before we go into the implementation details, I’d like to comment a little further on the differences between the JMS and the non-JMS cases.

As commented before, the critical point here is the correlation between the asynchronous messages. Since they are not natively correlated (as in the JMS case), we have to explicitly define this correlation.

There are several ways of achieving that. One could, for example, include the Message ID in some field of the request payload, for the application to be able to process it and send the Message Id in some field of the response payload. Also, a custom module would be needed to parse the response message and set the Correlation Id attribute with its value (using message.setCorrelationId() method). The module is necessary because the Correlation Id is evaluated in the Adapter Engine itself, before any mappings take place.

1. Sender RFC: maintain it as in any other sender RFC scenario; 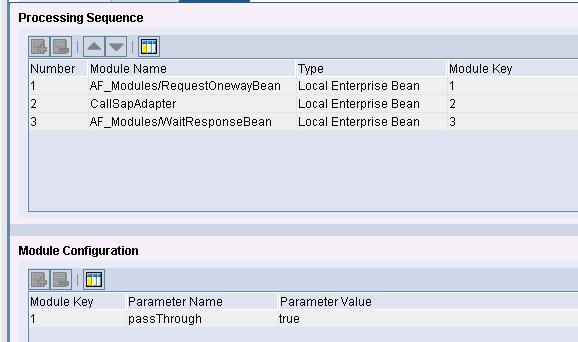 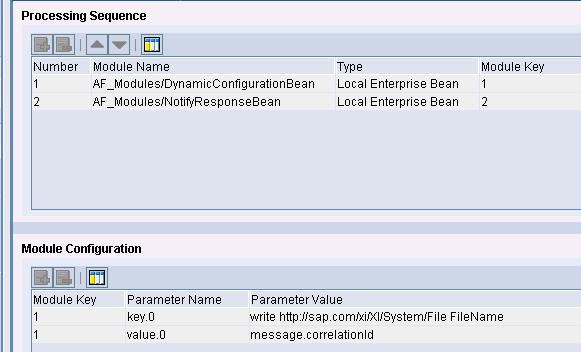 With this configuration, the DynamicConfigurationBean module will get the filename ASMA (which was previously set by the adapter) and write its value in the message.correlationId attribute, before the message is sent to the waiting process (WaitResponseBean) by the NotifyResponseBean module.

After the adapters are done, create necessary sender and receiver agreements, receiver and interface determinations. If you use configuration wizard, remember to create the sender agreement for the Sender file CC manually.

In our scenario, in order to simulate the Legacy system, we used a simple File->File scenario, where the request message was mapped to the response message. In the mapping, we performed a reversion in the string characters, in order to emulate the consumed service. Also, we set File Name ASMA in both sender and receiver simulation communication channels, in order for the message ID which is the file name of the request message to be persisted in the response message.

After the Repository and Directory objects are created and activated, run the RFC (with the proper RFC Destination set in SM59) in order to trigger the scenario. You should then be able to see the response. 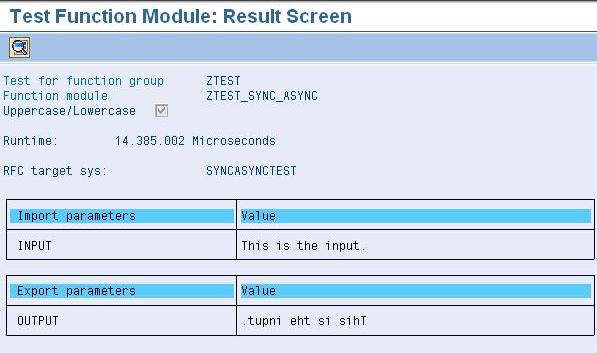 One last consideration I’d like to make is about the execution time. In the example below, the overall run time was 14.4 seconds, not that good for a productive interface. But this time is directly influenced by the pooling interval of the legacy system and the pooling interval of the sender file adapter in the sync/async bridge. In our case, both of these intervals were set to 10 seconds. In a productive system, shorter pooling times and a better synchronization could be realized to achieve a better run time for the interface.

I never could get the Synch - Asynch Bridge working without the BPM because of the problems with Correlation.
Your blog made thing pretty clear and the results of this should now be interesting. Thanks for the blog and the insight on the use of correlation in such scenarios.

Its been like 9 years since you blogged this, and guess what I had to refer to this blog for something I was trying and it still works like a charm! How time flies I say 🙂 9 years! Wow!

that is awesome! Still alive and kicking in the SAP space as well!  4 years later. 🙂

Shabarish Vijayakumar
August 3, 2007 at 7:20 pm
i think finally i found the solution to the thread i had posted on the same topic long back ago. THANKS FOR SHARING 🙂

Yeah, that was a recurring question in the forums, thus I wanted to share this solution as soon as I was able to make it work. 🙂

BTW
I guess we will use such beans
even more with 7.1 🙂

thank you very much for your comment.
It means a lot coming from you. 🙂

Former Member
October 17, 2007 at 1:22 pm
Hi,
Thanks for the blog.  I am running into a problem that the Sender File adapter on the receiver side never picked up file.

I can see the file in the directory created with the messageId, but never picked up.  The RFC timed out without receiving a response.  In SXI_MONITOR, I can also see the time-out error.

What step(s) did I miss.  I duplicated your blog and verified all the configurations several times.

did you create the sender agreement for sender file CC? In my case, I've created one using the Inbound Sync interface.

Bhavesh Kantilal
October 18, 2007 at 2:27 pm
Bill,
Is that you asking a question on SDN? Call this true collaboration 🙂

Former Member
February 17, 2009 at 5:04 am
You need create third message interface (AsyncOut) with output message = mtOutput (in this blog).
And use this MI in sender agreement.

thanks for the reply.
As per my message to Bill below, the interface name in the sender agreement is not validated whatsoever, so you don't have to create a new interface. e.g., in my sample, I've used the name of the Inbound sync interface.

I am facing an error No receiver.

Can you please Help me.

Henrique Pinto
Blog Post Author
January 14, 2011 at 8:49 am
Hi Kannan,
this was never a officially supported scenario. I myself never reproduced it in PI 7.1x, so if it doesn't work, it's very likely that some of the changes have make this not possible anymore.

Former Member
January 14, 2011 at 10:29 am
Hi Narayanan,
Use Virtual Receiver in the Sender Agreement. I Tried it it worked for me.

Thanks a lot for the wonderful blog. I have two doubts regarding the approach.

2. Since we are picking up the same file which has been written to the target application and deleting in on the sender file adapter poll, how this approach will be applicable in real life scenarios.

We will never want that the target file gets deleted.

Can you please help me to understand how can we solved these two problems.

Please take a look at this blog and the posted discussions (which addresses the RFC response question you have).

Thank you  Henrique  for this wonderful blog !!!!

I am also having a similar scenario, but instead of JMS/File adapter receiver side, I have SOAP adapter. Now I want to create Sync/Async bridge between SOAP sender and SOAP receiver.

Kindly help me in how to correlate the asynchronous response and the synchronous message using any standard module.

Your inputs will be greatly appreciated.

Have you done the configuration Sync/Async bridge between SOAP sender and SOAP(Proxy) receiver?

If yes, let me know the steps to do.