Introducing Eventus: How You Really Deal with Business Events

Here’s a little peek inside some of the machinery at SAP. Developers on the SAP NetWeaver team, in coordination with Product Management and many other groups at SAP including the User Experience group and Design Services Team, have created a prototype of a collaborative environment in which people can identify significant business events, capture relevant information, and resolve these events while interacting within an agile “Web 2.0” environment with other information workers. The motivation of this endeavor was to create a common vision, driven by outside-in research, of how SAP NetWeaver should enable event-driven information workers to collaborate in order to deal with significant business events. The prototype is called Eventus.

Eventus advances the concept of a situational composite and represents innovation in the areas of user interaction, enterprise information management, and business process and event management on top of the SAP NetWeaver platform.

Below I’ll tell you a bit about what we specifically prototyped, but I won’t go into detail on where Eventus is going from here. Suffice it to say it’s been enthusiastically received both inside and outside of SAP, with a cameo appearance during Henning Kagermann’s keynote at SAPPHIRE in Atlanta in April as well as other public appearances. Since a search for “Eventus” turns up zero results on the SDN as of yet, I thought it was time to get the word out here.

How did we start?

To kick off the Eventus project, we went out and interviewed customers to find out what really happens when they address unexpected events. Rather than always following a hard-coded business process to tackle events, what we found, not surprisingly, was a rich world of collaboration to get the job done.

First of all, business events are not only triggered from within enterprise systems but also from unstructured channels like email and phone conversations. Then, to deal with events, people fight fires: they run into each other on the shop floor or in the hallway, they write email, they talk. They don’t necessarily run through written procedures and even if they do, the procedures sometimes break. So the events people deal with often involve collaborative problem-solving between people spanning not only departments, but also companies (and not to mention, days, weeks, months…). In the end, it can take several people working together to come up with a process and set of steps (and their solutions). This is people thinking about the work – not the process. The process evolves out of the work – instead of the other way around.

So what did we create to support this?

First we developed a realistic business scenario. If you saw the demo at SAPPHIRE, you are familiar with the scenario, which centers around a fictitious automotive company, McGee Manufacturing. A supplier McGee relies on to create anti-lock brake assemblies, Taibai, cancels supply of the programmed integrated circuit that McGee uses to build these assemblies. This event comes to the purchasing manager of the company in an email, and she gradually realizes she needs to set up a collaborative task force to deal with this.

After delivering the email to a central task list, she opens the task in a workspace and begins to draw in both structured and unstructured information, as well as all of the relevant people who will need to deal with this. To do this, she uses a series of views that she can mash together in the workspace, including business objects, analytics, and less structured collaborative tools such as a two-way commentary and a view in which quick, unstructured thoughts can be gathered. 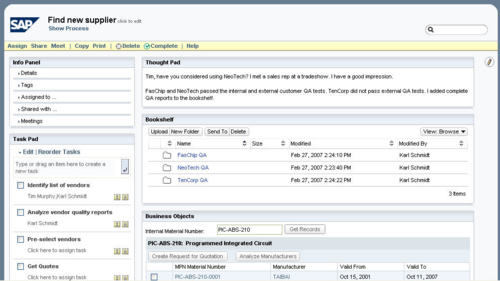 Skip to the happy ending!

Long story short, after four weeks and at least four people collaborating together, this workspace has grown into exactly the right context needed to deal with this business event. To not leave you in suspense, of course a new supplier for the integrated circuit is approved and selected to replace Taibai, a purchase order is issued directly from within the workspace, and McGee automotive continues its production cycle without interruption.

Addressing the less-structured ways in which people collaborate while all-the-while embedding SAP’s strength in transactional and business process information is the key to Eventus. The Eventus prototype demonstrates how SAP and customers who rely on us can bridge the gap between the structured and the unstructured worlds of information to get the results you need.

PS: If you missed SAPPHIRE this year, watch the keynote in which Eventus was featured here:

Former Member
October 22, 2007 at 2:58 am
More info on this please. With whatever you have given here, I can think of atleat half a dozen applications

Moya Watson
Blog Post Author
October 24, 2007 at 5:22 am
that's very exciting, ajesh, and i guarantee eventus is exciting. we'd love to know about your half-dozen applications. would you please contact me? you can email me at moya . watson @ sap.com
thanks,
-m

Marilyn Pratt
October 26, 2007 at 9:26 am
Hi Moya,
I think that if you extend the tag on the blog to BPX and address the question to the BPX Community as well, you might get some interesting answers from folks who are thinking about the very issues that Eventus proposes to address.
Hope we can "catch" their attention, too.  I'll surely forward this link to a number of the folks engaged in the BPX Community Project and I hope they will respond to you.  Thanks for making sure Eventus gets on the map in our communities.
Marilyn