Finding Petroleum isn’t a single activity. It is a series of steps: identifying a prospect, testing the rock, drilling a well, determining whether the find is commercially viable and estimating the dimensions of the reservoir with further drilling.

Production wells are then installed and gathering pipelines are assembled to transport the oil to central points for further shipment.

The upstream sector involves the most investment risk because of the high capital expenditures and great uncertainty that oil will be found.

The E&P industry is uniquely characterized by

On the other hand, it historically has provided greater rewards in terms of profit and return on investment than other segments of the industry. Recent technological advances have reduced the uncertainties and contributed to the more efficient use of capital, enhancing the industry’s success, even in a low-price environment.

The biggest breakthrough in petroleum and natural gas exploration came through the use of basic seismology. Seismology refers to the study of how energy, in the form of seismic waves, moves through the Earth’s crust and interacts differently with various types of underground formations. Using IT/ERP we can classify an areas, both onshore & offshore, into sections & map the seismic readings accordingly. This will help in Drilling & Completion of wells. IT can be used to compile and assemble geologic data into a coherent map of the underground to assemble geologic data. Technology can also contribute to identify and exploit reservoirs or portions of reservoirs that are less accessible, small and/or compartmentalized, incompletely drained, or porous.

ERP can help have log of cost, efforts & resources required as follows:

Based on Data obtained during and at the end of the drilling process (cuttings, well logs, etc) a decision is made as to whether there is sufficient oil and gas to justify completing the well. ERP can play a vital part in integrating in these complex systems & network for optimum oil & gas extraction. 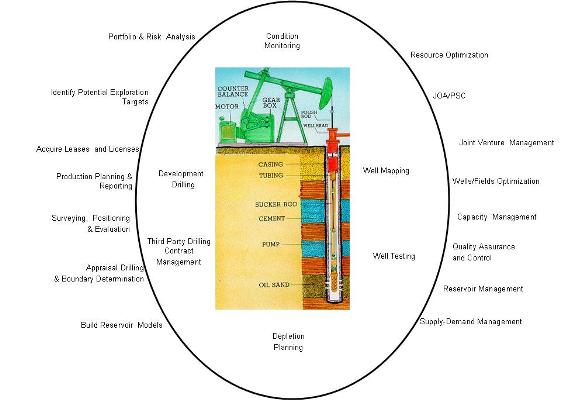 As can be seen IT contribution to finding oil is huge. It cannot change geology, but by revolutionizing the information available on the features of a geologic structure, it can enhance the likelihood of success. A primary benefit is the ability to eliminate poor prospects, thus wasted expenditure on dry holes.

In addition, drilling and production technologies can be enhanced to exploit reservoirs that would have formerly been too costly to put into production and, as described above, to increase the recovery from existing reservoirs

Former Member
July 23, 2007 at 6:47 am
Some of the matter in this blog is referred from
1. http://www.howstuffworks.com/framed.htm?parent=oil-drilling.htm&url=http://www.chevron.com/about/learning_center/primer/

This is purely for the purpose of discussing how IT/ERP can add value to E&P drilling.

Former Member
September 14, 2007 at 4:41 am
Vijay,
Nice to see you posting in this forum.  I concur that IT spending can foster better results for E&P companies.  The hurdle to overcome is the silo approach most E&P companies still employ with respect to technical and back office systems.  We in the O&G IBU recognize this gap is an industry need and hope we can be a part of the solution.