NetWeaver Mobile 7.1 from an Architectural Perspective

Follow RSS feed Like
0 Likes 132 Views 2 Comments
Mobile Environments are different from traditional IT environments. They add a new dimension in complexity as a result of the distributed environment and the diverse technologies involved. Operating mobile landscapes can therefore be a challenge for Administrators.

SAP’s new platform for Enterprise Mobility, NetWeaver Mobile 7.1, implements a large number of lessons learned from numerous customer projects and enables companies to operate bigger than ever mobile landscapes in an easier fashion.

SAP NetWeaver Mobile 7.1 is the next version of SAP NetWeaver Mobile and the successor to the SAP Mobile Infrastructure. It offers significant improvements in terms of data synchronization performance and also comes with new tools that simplify development. It also has improved Mobile Device Management capabilities to minimize the effort of managing mobile devices.

Some of the highlights of the new product are:

NetWeaver Mobile 7.1 implements the three tier architecture of a typical mobile environment. It basically is the same architecture that you might know from the Mobile Infrastructure. The mobile environment consists of a number of mobile devices, a SAP NetWeaver AS Middleware system and one or more backend systems. The client connects to the Middleware by using an https connection. The middleware connects to the backend using an RFC connection. 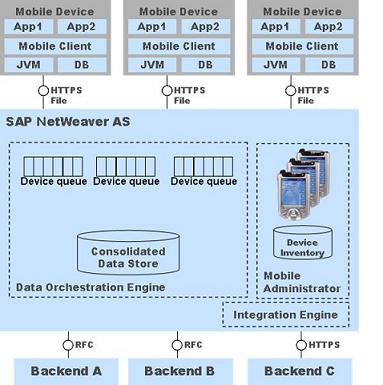 The Consolidated Data Store (CDS) is a component of the Data Orchestration Engine. It is basically a data cache containing the latest version of all mobilized object instances. This helps reducing the load on backend systems in case of data realignments and when new devices are created. Queues can be configured to have the latest data (Queues are precalculated).

In addition to that the Data Orchestration Engine has a device queue for each physical device. This queue acts like a mailbox containing latest updates to object instances. During synchronization cycles, this information is picked up by the device and updates made on the mobile client are dropped off.

The Device Inventory is a component of the Mobile Administrator that is a part of the Mobile Middleware as well and serves as a central store with information on mobile devices that are currently used in the field. The information stored for these devices contains, among other data, OS type, installed applications and users.