For the last couple of years the EU has sponsored projects to create standards for traceability. The most recent addition being the publication of a draft of the TraceCore XML standard. This standard defines the format of XML messages that describe traceability, i.e., concepts like links, organizations and traceable items, mechanisms to uniquely identify organizations and traceable items, and properties. TraceCore does not specify what mechanism should be in place to support storage and retrieval of information, neither at the origin of the files nor at the chain partners. Thus one can envision approaches like ranging from point-to-point communication between partners, to having a shared repository where information can be inspected on demand.

The scopes of TraceCore and GTNet are different; TraceCore XML is a data format for exchange of traceability data, while GTNet is a traceability system that combines information from trading partners in the same chain(s). As such GTNet fills the role as shared repository excellently! I have tried to illustrate this difference on the graphic below. Each TraceCore-file is in a way a piece from a jigsaw puzzle, while GTNet is a system for solving such puzzles. 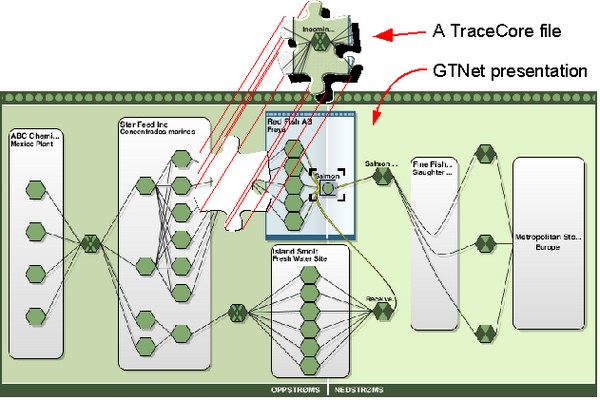 The TraceCore XML is, as the name suggests, a core standard for exchange of traceability data where the data is formatted as XML. The term core is used to stress the fact that the underlying data model is generic. That way it can be applied to any type of food and in any possible food chain. The project web page is located at http://www.tracefood.org.

Common use of the term standard means a universally agreed upon set of design rules or guidelines for interoperability. Everybody knows the advantages of a standard – using a single, agreed upon format or technique for interaction. So also for traceability. Information exchange can often be specific for pairs of chain partners in the absence of standards. By using a standard, information becomes re-usable and unambiguous, and work can be reduced. Suppliers can deliver information in one format and buyers can receive information using the same format. Integration into local systems can be done once at each company, instead of each company having to do it once per partner.

For reasons that should be obvious Tracetracker is also interested in the TraceCore XML standard. Because of this, GTNet can already accept data files encoded according to TraceCore XML, and export of TraceCore XML files from GTNet is expected to be available later this year.