The “usage type” Application Server (AS) plays a very central role. It is responsible for the persistent storing of data and its processing. For this, it offers programming interfaces that allow other components of SAP NetWeaver, such as the SAP NetWeaver Portal, to request data, have it edited, or store it. The primary data storage of a NetWeaver AS is usually a central database.

The Application Server ABAP (AS ABAP) allows you to program applications in ABAP. For this it provides the ABAP runtime environment (a virtual machine for ABAP programs), the ABAP Workbench, and an integrated change and transport system (CTS). The following figure shows shows an overview of its most important components. 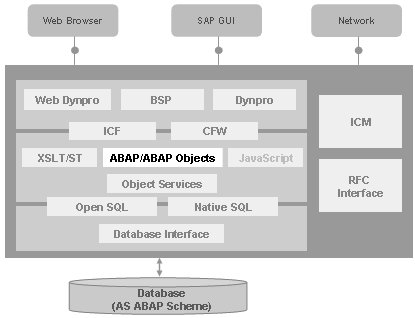 AS ABAP can be used either by people using user interfaces (Web Browsers or SAP GUI) or by other software components through the network. For the latter two main protocols are used: HTTP/HTTPS/SMTP for Internet connections (controlled by the so-called Internet Communication Manager, ICM) and SAP’s own Remote Function Call (RFC) protocol (via the RFC interface).

Most of the components of AS ABAP can be divided into three layers:

The other components are communication components:

In Chapter 3 of the book “ABAP Objects  ABAP Programming in SAP NetWeaver” you find more details about application servers and the ABAP runtime environment.

Former Member
April 29, 2007 at 11:55 am
Horst, thanks for taking all these scattered bits and bringing them together in this nice all-in-one post.  Very helpful!

Former Member
July 10, 2007 at 12:12 am
I am an ABAP'er and my requirement is to make my program available in Web browser,but i have no idea how to do so except that it can be done through ITS, your blog gives good information but i want to implement it, can you provide me with some e.g. or links which tell me the procedure of doing it, i want to run it on 4.6c, but first i want to test it on IDES.