Follow RSS feed Like
0 Likes 134 Views 0 Comments
This blog entry is about how to move installed SAP systems from one host to another one in about ten minutes. We will start with some few prerequisites and going on to the main subject of this blog: moving the SAP systems. We will guide you through the whole process by a step-by-step-guide. So let us start now.

If you want to move a SAP system in a zone, there are some prerequisites and considerations that need to be noted before starting to install SAP in zones and subsequently move them within the host system environment.

In our scenario we have two hosts, two zones and two ZFS pools. Have a look on the following picture for more information: 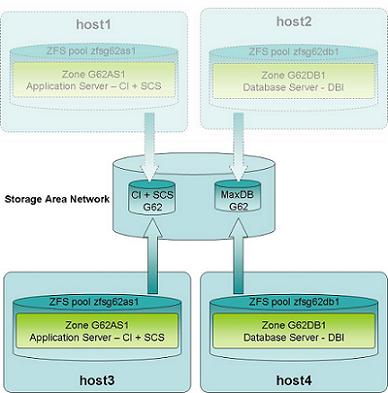 We intend to move the zones from hosts one and two to the new hosts three and four, because the later ones have more capable hardware, which is strongly needed.
Furthermore we do not intend to reinstall the central instance or the database instance. Of course, data loss can not be tolerated but we are willing to accept a short interruption of normal service that is ideally minimized. In the target configuration the two zones are running on host three and four and are still stored on the SAN. The old hosts are disconnected from the SAN. The next subsection shows the necessary steps to move from the initial to the target setting in a step-by-step fashion.

This step-by-step guide is intended to show all necessary steps for moving an SAP system’s zones to the two new hosts. If you follow this instruction, the process should be straight forward and no difficulties are to be expected.

The stopsap script stops the central instance and the central services. Then it is necessary to disconnect from zone G62AS1 and in turn establish a connection to zone G62DB1. Within this zone the stopdb script is used to stop the MaxDB instance.

Now, let’s shut down and detach the second zone:

Before attaching the zones to the new hosts, we will have to validate the zone configuration. It is therefore necessary to have a look into the zone configuration and, if necessary ❗ , update the interface name.
Right after this step, usually the installation of the zone would follow. However it was already installed on the old host, which is why zoneadm will respond with an error message, if you try to install the zone. Also if you try to boot the zone, zoneadm will give you an error too, complaining that the zone has to be installed firstly.

So instead of installing or booting the zone, the zoneadm attach command needs to be issued, which simply attachs the zone. After attaching, the zone can be booted.

Hint: Similarly we have to do the same procedure on host four, which contains the database instance zone. Having successfully performed all indicated steps, the zones are now up and running and the restart of the SAP system can begin.

We showed how to move a SAP system from one host to another using Solaris’ virtualization concept – zones. As pointed out, only a small number of steps are necessary to achieve this goal. In hosting scenarios, where you have to deal with peak loads in a timely fashion, this is a great advantage. This is especially true, since Solaris’ concept offers potential for automating the steps necessary to move a zone. This could be exploited by creating a simple tool, which switches zones from one host to another.
As we stated, although it is possible to move and then boot a zone from e.g. a SPARC host to a x64 host, it is very difficult to develop a full adaptive environment based on zone. This difficulty arises from the fact that the SAP and MaxDB kernels are hardware-specific, implying that you can not use the MaxDB kernel for Solaris SPARC on a Solaris x64 platform and the other way around. The same is true for the SAP kernel.

This blog entry was made possible by the Sun Early Experience Lab at Technische Universitaet Muenchen (http://de.sun.com/company/press-releases/2005/pm_065.html) and the SAP University Alliance Program (http://www.sap.com/germany/company/citizenship/education/alliance.epx).