2 0 354
Authentication by UserId and Password is the part of discussion here. In the business process we frequently have requirements to authenticate users based on some condition like ‘who they are’ and ‘where they are from’. Restricting access based on some criteria other than the identity of the user is generally called as Access Control. Let’s discuss how Access Control can be achieved.

Think of a situation as represented in the diagram, where the XYZ company Inc., has a user to access the integration server. He may deliver any message there as the sender agreement does not prevent it. How can we enforce security? 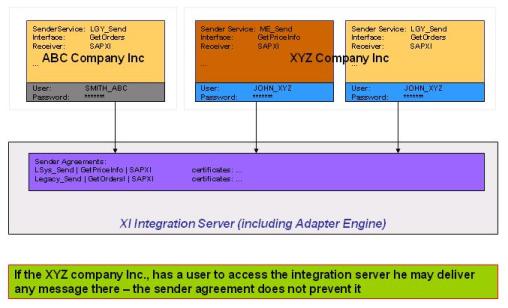 The client sends a message to integration server using his service as sender service and his user configuration. Configurator assigns user to business system services or business services which have been agreed with his client.

The XI runtime inbound processing (adapter engine or integration engine) receiving a message checks if the sender service has a user access list. If it has one, the current user must be one of the user access list, otherwise the message will not be accepted.

If it does not have one, no check will be executed and the message will be accepted.

Client sends a message to IS using his service and user.

In configuration, assign user to service that has been agreed with client (restrict access to sender service to specific users.

During runtime, check if current user is part of user list, otherwise message will be rejected 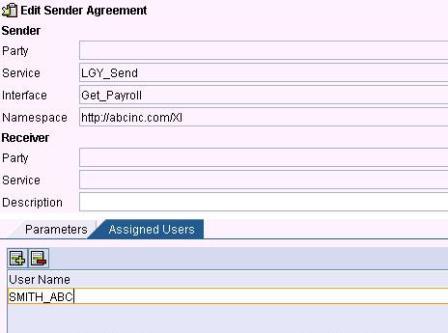 we already have a weblog that describes
exactly the same info:
ACL - Confine users sending messages

There are many blogs on ACL topic in SDN. Any new information about ACL other than that is already there would be very helpful. As a common practice we search on sdn to see if there is a blog that is addressing the topic or post a question  in XI forum.

Again thanks for contributing but please make sure you are not duplicating the effort.