2 0 27
Now after TechEd ’06 has wrapped up, still need to tell everyone about the Demo Jam, but I’m here still in Bangalore with Mark Yolton doing a small Partner tour. Mark decided to take full advantage of his time here in Bangalore by touring some of the partners in the area, he wanted to extend that out to Hyderabad, Chennai, and some of the other areas but due to scheduling reasons needed to keep it to the Bangalore area. He also asked if I would accompany him on his tour. It sounded quite interesting so of course I said yes, I get to talk to so many of the folks over here via IM, Email, telephone and of course during TechEd but to see where they work and all that was just such a great opportunity! We packed each day and for those of you familiar with the Bangalore area traffic is a nightmare so packing a day really means packing a day. We visited 3 locations yesterday:

All 3 are located in an area of Bangalore called “Electronic City” so it made travel a bit easier, if that’s possible 😉 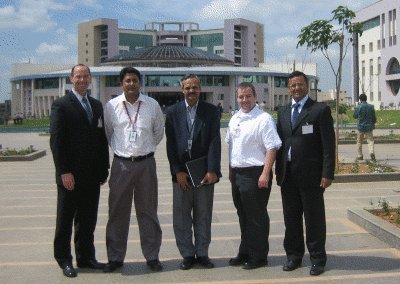 We stopped first at the Wipro campus and these are really campuses around here the stuff to rival the best resorts everywhere else in the world I was blown away not only by Wipro’s but by the other two as well. They have everything from basketball and tennis courts to banks and coffee shops. Talk about taking great care of your folks! Kartik was there to meet us and get us through security (serious stuff) and then show us around a bit (had a cappo! so was happy camper to start the day). We got into the conference room and found it to already be filling up with folks (great turn out). Mark did an excellent job of convenying some of the messages about SDN and of course the new BPX community and got some excellent feedback for the next steps in the BPX realm. Kartik had actually planned to have many people there not 100% into the SAP space but rather those into the BPX realm so it was an interesting mix of folks, thoughts, and feedback. We were hosted by Kartik and Ramakrishnan R and continued a chat with them after leaving the large group. Our next stop was just around the corner at Infosys which has a world famous campus for visiting dignitaries and after a stint with security we were taken by golf cart (no cars allowed on their 80 acre campus) to their original building the first one (see the photo) that started it all. We had there again a very good session with Mark and I breaking into a small comedy routine (never thought you’d get an enterainment road show did you) while they got a remote location connected and also our laptop all hooked up and ready to go. 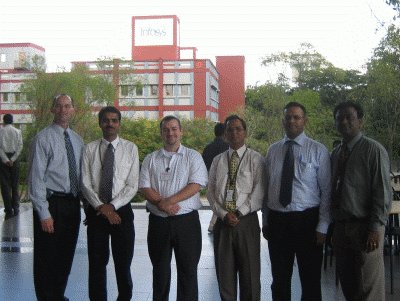 Despite the fact that I had heard the presentation shortly before it was still quite surprising the different aspects of it that the different groups focused on, I watched the audience closely on different slides to see reactions or lack of as there were a few surprises in there for them as Mark did mention a few things that may not be generally well known. The questions again very interesting and we look forward to seeing what Infosys as well as Wipro do with all this new information. A special thanks out to Anil and Sriram for inviting us and setting things all up. Our third stop, 3rd yes as we also had a dinner meeting planned with a 4 group who came down to Bangalore just to speak with us, so we now headed over to the Saytam offices. Here we were greeted by a small room of eager to learn folks as well as a online video/tele-conference with multiple of their other locations so by far they were I think the biggest group we spoke to all day and we have honestly no idea how many that was but they challenged us with some hard questions just like the others did and really pushed to get into the deep details instead of just sitting back and listening to just the surface level. This seemed to be a theme throughout our entire Bangalore trip, ask the surface level stuff but then dig deep into the core to find out the deeper details and then challenge the current preceptions and thoughts around the topic. Mark challenged several to go out and blog their thoughts on SDN and he welcomed opposing view points and ideas as that is how we grow and evolve, it’s through that good interactive feedback that we can really start to move and make the right choices as we move forward into this new realm of the BPX. Ramesh Babu and Amaresh deserve huge thanks for inviting us and setting everything up, and the special “welcome to Bangalore” was really nice with a, well it was like a Hawaiian Lei but made out of Sandelwood. Mark has a spot on his wall already picked out and I will soon as well! Above all else we want to send out a very big thanks to Krish at SAP Labs for helping to arrange and set everything up as well as to Sidhartha. Sidhartha actually accompanyed us all day today to ensure all things went well and we were very greatful for all his help! He’s new at SAP so we really threw him into the deep end and he came out a champ and was eager for the next rounds. He had to excuse himself though from our dinner invitation as he did need to get back to the office and get some stuff working. That left Mark and I to meet with Vinod and Vijay from Intelligroup who came down to meet with us. These two braved the Bangalore traffic, as in waiting for us to make it there (only 1 hour late) after flying in from Hyderabad just to share some thoughts with us. We talked about how things are progressing, leveraging the community, better and more interaction with partners. We spoke of some interesting thoughts on future interactions from universities to SDN and BPX. This as well turned into a fantastic meeting with great promise and we look forward to working with now all of these great groups. For all those we spoke with and those we are going to speak with especially for those who showed very high interest in BPX, and had many insightful questions about the role. There’s a great new article by Helen Sunderland — one of SAP’s own senior consultants and a BPX herself — in the October/November/December issue of “SAP Insider” magazine. You can read the “Day in the Life of a BPX” article in our Business Process Expert community site.

It's sad that you did not quite make it to Chennai this time. But the next time you do plan to visit Chennai then I would be glad if you could visit "Cognizant"'s location.  It is an "open invite" from my end. There are a lot of eager people here who would be happy to meet Mark and you and gain further insights. Cognizant does have a Bangalore office which is pretty close to the airport.

We will keep that in mind for the next time, who knows when it might be but Mark did say he was looking to start an extension of our offices there in Bangalore.