To be in tune with the global trend in the SAP NetWeaver Application Server, Java ™ EE 5 Edition, the SAP NetWeaver Developer Studio comes based on the latest and hottest platforms for Java and Java EE 5 development. Namely, these are:

Eclipse is the world’s most popular environment for Java development and at the same time the most popular “all-purpose” platform for hosting practically any client applications. Eclipse is being developed by an open-source community called Eclipse Consortium, patronized by IBM. Traditionally, Eclipse platform implies features like:

Eclipse 3.2, however, provides more than that. Eclipse 3.2 contains a lot of improvements in the set of Java development tools, overcomes many of the problems that existed in previous releases, and makes an even better universal application platform.

Many of the improvements in Eclipse 3.2 come from the adoption of a standard for application platforms called OSGi. Currently, the heart of the Eclipse plug-in platform is an OSGi framework called Equinox. The adoption of OSGi has brought the following advantages to Eclipse:

You can find more information about OSGi at http://www.osgi.org.

You can find more information about the Equinox project at http://www.eclipse.org/equinox.

The Web Tools Platform project is an open-source initiative of eclipse.org. It is supported by most of the major players on the Java EE market.

The idea of the WTP project is to provide a rich set of tools for Web and Java EE application development in the Eclipse environment.

The stated mission of WTP is to provide quality, vendor-independent, open-source, standards-based tools that can be adopted by commercial companies and turned into innovative and efficient commercial products. That’s exactly what we at SAP intend to create by gradually enhancing our WTP-based Java EE tools.

WTP has a broad scope. It covers numerous specifications and standards, including all parts of the Java EE specification and related (such as HTML, Cascading Style Sheets (CSS), JavaScript, XML, Simple Object Access Protocol (SOAP), Web Services Description Language (WSDL), Universal Description Discovery and Integration (UDDI), and so on).

The WTP project is still in an early phase. The only officially released versions to this moment are WTP 1.0 and 1.5.

You can find more information about WTP at http://www.eclipse.org/webtools.

The SAP NetWeaver Developer Studio enhances the Eclipse and WTP tools with the following features: 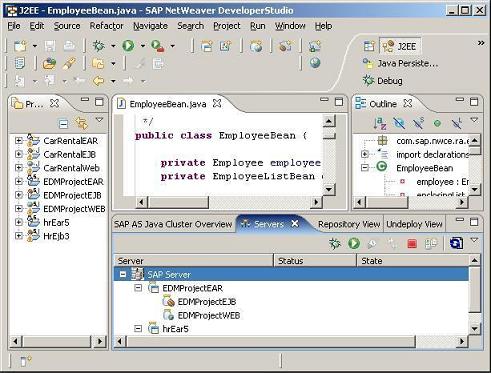 In the next part of the series, you will learn about the new features of the application server’s administration tools.