2 0 901
Let’s make the objects of the SAP Web Application Server/NetWeaver stack (WAS) more shareable. The transport management mechanism within the WAS is a great tool to manage the transport of objects between systems in one large landscape. However, no provisions are made to share objects amongst developers via the internet. This problem is solved by using SAPlink.  I created two plugins for smartforms and interactive forms (PDF). These plugins for the SAPlink tool enable you to import and export smartforms/Interactive form objects.

If you have not yet installed the SAPlink tool, goto the website and follow the installation instruction first. 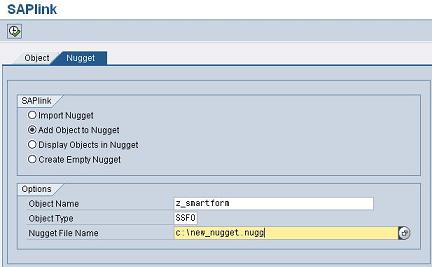 Export a smartform to a nugget (cabinet file containing multiple SAP objects). Start the SAPlink application and select tab ‘Nuggets’ and create a new nugget. Once you have created a nugget you can add objects to the file by selecting ‘Add object to nugget’.  1. To add smartform select the object type ‘SSFR’ for SAP Smartform objects.  2. Enter the name of the smartform in the object field name.  3. Select a nugget to which you want to add the smartform to. 4. Execute Start at step 1 again to add more smartforms/PFD-forms to the nugget.

Former Member
October 26, 2006 at 1:14 pm
With no developer documentation we have people building plugins --- i think this puts the total near if not over 20 now.  Great job Onno!

Unfortunately code.google.com is no longer available, and with it the plugin for interactive PDF Forms.

Up until now Google was not forthcoming concerning an alternative location...so if anyone has a copy or URL for me I would be gratefull!