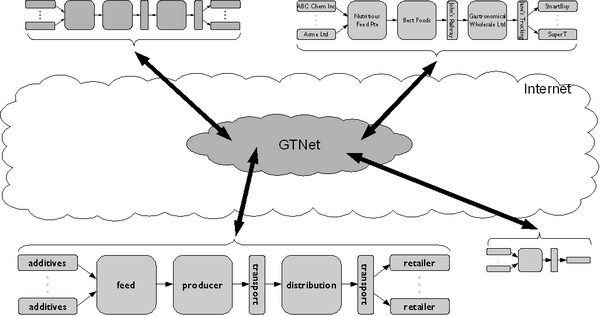 The graphic above shows how multiple production chains connect to GTNet. As long as there are no common factors in two chains, they are not connected to each other. Connection between companies stems from exchange of goods between them, provided that this exchange is modelled electronically and the corresponding movements are reported to GTNet.

Global traceability is concerned with the movement of traded goods, and GTNet is not interested in the internal workings of a particular company. The separation of traceable entities into batches and trade units is the mechanism by which the company has control over an entity’s global visibility. GTNet handles the entities that should be visible globally, i.e. trade units. If we look back at my previous blog entry, then this means that batches in the jam example are never exported to GTNet. So where do they go? 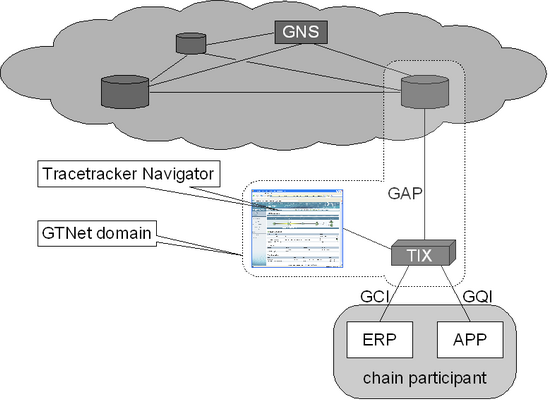 The graphic above identifies how a company has a TIX for connection to the GTNet. The TIX, the Navigator GUI and the associated hub inside GTNet make up a so called GTNet domain. Inside the GTNet there are a number of hubs that rely on a GNS for name service, e.g. mapping between textual names and internet addresses. The TIX separates information into internal and global, for storage locally and export to GTNet, respectively. While there is only one GTNet hub in a domain, it can contain several TIXes.

People at the company can access traceability data in the domain through the Navigator or through custom applications (The box labelled APP in the figure) that rely on the GQI-protocol. The Navigator is generated and rendered by the TIX.

The system provides three ways of looking at traceability data through the TT Navigator:

The graphic above shows flow of data from the company on the left hand side to the GTNet on the right hand side (represented by the TIX). There are three components in the illustration that together describe the traceability data:

I guess that the only thing that is certain about chain participants is that they are all different. In terms of connecting to GTNet and publishing information this means that one can never assume that two companies have the same kind of IT infrastructure. So GTNet must be able to interface with anything, ranging from small businesses without IT department up to large corporations where the IT department has control over everything!

Customers with some random ERP system will often have internal traceability from Tracetracker, e.g. like the cowberry example earlier on. For SAP users this is redundant as SAP can be used to maintain internal traceability. In a way, SAP as a common denominator makes companies equal, and this simplifies the process of bringing traceability to customers as we will look at in the next blog entry.