Web Dynpro for ABAP: The Book

12 0 3,158
You may have noticed that the Being proud of your community… of books produced by SDN members grows constantly. My contribution to that list is now also available and I hope it adds some benefit to the developer community. To some of you the book release might not be big news, since the German version was released already back in May. However, I was waiting for an anouncement here until the translation was finished. Since mid of September you can now get your English copy from SAP Press.

Since it is the first book of a rather new topic, the basic concepts needed to be covered, even though there are already a couple of presentations and articles provided here on SDN. I’ve tried to do this in a slightly different way compared to the available SDN material. So, I hope you’ll enjoy it and have fun while catching the basic ideas of such concepts like lead selection, cardinality and singleton nodes. SAP Press has published the table of content of the German version as well as the English version on their respective websites. I’ve enjoyed most working on some integration scenarios based on the Google Web APIs service. In chapter 7.2 I’ve developed an example which includes calling the Google Web APIs service and displaying the results in a web dynpro application using the BusinessGraphics UI-element. This example was inspired by a scenario found in Google Hacks published by O’Reilly. Besides that, Google Maps is one of my favorite services on the web. I was eager in finding some way to integrate Google maps into a web dynpro application scenario. Some ideas for connecting to Google Maps are introduced in chapter 5.2 where I’ve explained the concepts of dynamic programming. 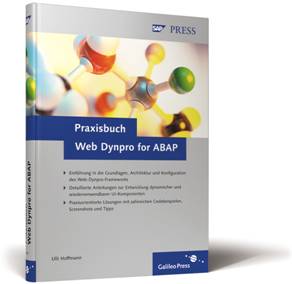 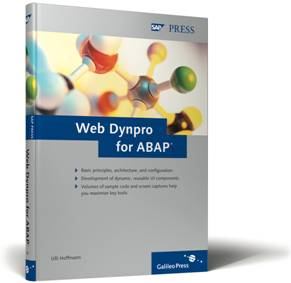 About Updates and Downloads

You can download the examples from the SAP Press website (German version and English Version). In addition to that I’ll keep you updated with material covering the book on our company web page. There you will find How-To’s on installing the transports including all examples which were developed in the book. Not every screen shot made it into the text. The complete set of screens for each example component or application is made available as a download accompanied by the ABAP sources in ASCII format. I won’t be able to make it to SAP TechEd this year. But you can let me know your feedback through the usual channels. I hope you’ll enjoy the reading the same way I’ve enjoyed the writing. May the Web Dynpro community grow!

Witalij Rudnicki
October 8, 2006 at 11:17 am
Hello,
The link http://www.inidfab.com/cms does not work. It may be temporarly, but today I was not able to open it.

Btw, descriptions on SAP Press site are quite poor to make buy decission. I usually wait until a book is available on Amazon.com (prefferably rated by others 🙂

I've checked with our service provider. The site is up and running again.
The book is already available on amazon. Maybe your comment and rating will be the first.

Thanks and regards, Ulli

Former Member
October 13, 2006 at 1:53 am
As required by a current ABAP Web dynpro project, I need the following:
1) F4-help with extra field on the view right to the F4'ed field displaying a description to the field value selected.
2) Information on the transaction concept of ABAP Web dynpro

On point 2 there seems to be no information in your book (maybe except some very basic stuff). I have the impression that after processing an event (such a button click) and having the view ready for the next user action, an implicit commit is executed by SAP system.

On aspect 1 there is information about F4- and other value helps (that's good). But what about implementing a descriptional field? This is a basic requirement in many projects. I also didn't find any SAP example for that via SE80. Also there is no documentation available anywhere. Could you help me with that? My wish: as less programming as possible (please notice that there are several F4 helps on the view. Some F4-helps are existent already (auto-generated), cannot be changed and have the same name for the return field containing the descriptional text.

I wonder at least for aspect 2 why there is no valuable information available in general.

I just follow the WD4A text book example from page 111 (Implementation of Selection Options) to page 115 and found that most of these examples are hard to follow, probably because it is not a step by step one.

Like in figure 3.28, the text suddenly display without any previous work/mention on it !  And if you try hard to follow the example and then run your work, the result will not display as indicated by the text book.  I mean something must have been missing if you just follow the example by this text book !

thanks for the feedback. It is planned for the next edition to have a summary at the end of each chapter, which describes the step-by-step implementation.
Regarding your particular example, I will have a look and see what is missing. Drop me mail or register on the INIDFAB website so I can send you an update.

on the INIDFAB website (www.inidfab.com) follow link The Book-> Book Updates in order to see the step-by-step implementation of the 'dropdownlist by index'-exampel.
Let me know in case you have more questions.

1) I created the example ZEXP_POP2NAVIGATE and after pressing the popup button, no popup window is displayed. After pressing again the message is displayed that the window W_POPUP already exist in the dump. What is wrong ? (in this simple example there are no mistakes in copying methods form your examples .txt)

2) I created the examples ZEXP_CONVERSION_RM and ZEXP_CONVERSION_FB. I get in both a dump with the message "Node conversion is already mapped". What is wrong ? I am sure there are no mistakes, all is only mapped once from the component controllers !

There was also in error in a example I don't know on this moment, but with my own fix it was working afterwards.

It is a difficult book but going back sometimes after reading you understand it finally, but it is not easy to read in your bed for example. I am glad I finish the book soon to start another topic in SAP.

By the way I did all examples in the Netweaver Trial version !

2) When I tried to add the addresses to Business Partners for example ZEXP_DYNAMIC_BPA I got the message "Logical system is not defined" so I added the adresses in the method onactiondo_display_bp !?

3) a) With example ZEXP_SEARCH_BY_DOMAIN I got the message "Program IGS.NSP not registered" !?
3) b) MR_HTTP_CLIENT must be added as attribute !

4) The examples ZEXP_PORTAL_SOURCE and _TARGET are not possible in the trial version because there is no PORTAL !?

5) The example ZEXP_INTERACTIVE_FORMS is not possible in the trial version because the Adobe software is not available !?

6) For the example ZEXP_CUSTOM_SH_APP_ENH I could not add the enhancement ZEXP_CUSTOM_SH_COMP_ENH in the trial version, maybe something different in the current version since the book was written ?

7) When one speaks of interfaces in the book are that really interfaces as the official definition, or are just classes meant (so not interfaces used/defined in classes) ?

8) General question : What is the difference within the view controller between the references wd_this and the one taken by wd_get_api( ) ?

Former Member
March 1, 2008 at 6:42 am
1) For the DVALUE on DIMID I've created a DDK_DVALUE for which the selectedKey attribute is linked to V_DIMENSION.DIMENSION.DVALUE an of course the in the context of V_DIMENSION the DIMENSION node is copied and mapped from the componentcontroller.  No results however in the drop down list. And of course in the componentcontroler DVALUE is linked to the dictionary search help H_T006D

Former Member
December 9, 2008 at 1:12 pm
I have just downloaded the examples from sap-press.com but I have no idea how to import the transports to Netweaver. I am using NW 7.0 trial version.

Ulli Hoffmann
Blog Post Author
December 12, 2008 at 1:17 am
1. Unpack downloaded zip file
2. Copy file K000084.B7U´to /sap/usr/trans/cofiles
3. Copy file R000084.B7U to /sap/usr/trans/data
4. Use transaction STMS, select Overview->Imports
5. Double-click system NSP
6. Select Extras->Other Requests->Add
7. Logon with the DDIC user supplied for system NSP
8. Select the transport which you wish to import to be added to the queue
9. From the queue select the transport and press the button for importing
10. The import process is started in the background and will run for several minutes