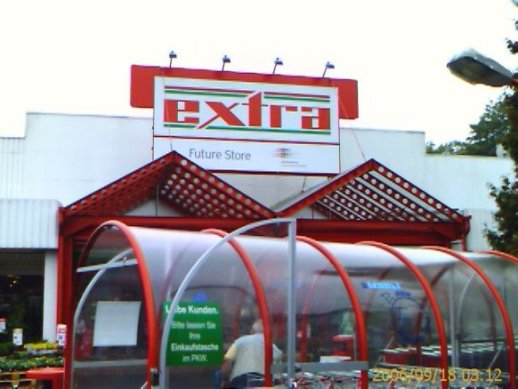 Last week I attended the EPCglobal joint action group meeting in Duesseldorf, Germany. Hosted by Metro   (One of the largest retailers in Europe) the meeting was kicked off by a trip to the Metro Future Store.  After the bus   driver made his third U-turn and started asking for directions, I began to wonder if the store was actually going to be   built in the future and we were just early.  In fact, the store already existed and we were simply late due to poor   planning.  I don’t want to be too critical because I really enjoyed the trip, but RFID, as I’ve pointed out in the past, is   one technology that enables Real World Awareness.  Others include things like, um, oh I don’t know, GPS and mapping   software.  Sheesh.

Logistics issues asside, the trip proved to have been worth the wait.  We finally made it to the Metro Future Store in   Rheinberg, which, for those of you who missed the opening ceremony with celebrity guest Claudia Schiffer, a Rheinberg   native, several years ago (I caught it on the nightly news, but I was living in Germany and don’t know far the news spread)   is a combination of grocery store and a test lab. The idea was to pick a small town in Germany that would be representative   of a typical community in which Metro stores exist, and to see both how the general population interacted to new   technology, as well as how the technology stood up to actual usage.  In the nature of full disclosure, I should point out   that SAP is a platinum sponser of the Future Store, but I only found that out half way through the tour.

This is a bold move for a retailer for several reasons.  First, there was a significant committment of funds required to   make the venture successful, and second, they put their brand at risk with this experiement.  If the Metro Future Store had   failed terribly (certainly a risk) they could have seriously tarnished their image.  Fortunately the endeavor has been a   success.  Usage of the store by the community has increased since the adoption of the new technologies, and costs have   simultaneoulsy and significantly decreaseed. 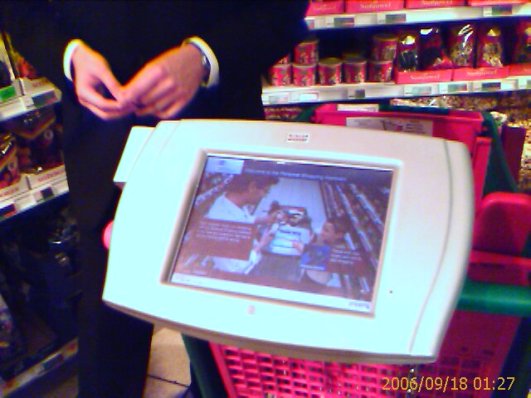 The first thing that our tour guide showed us was the future shopping cart.  As you can see, it has been outfitted with a   ‘Personal Shopping Assistant” that keeps an up to date inventory of the products placed in the cart.  Currently the carts   in the store aren’t outfitted with RFID readers, but instead has a bar code scanner to recognize the products.  However,   the same has been implemented in their development labs using RFID.  Customers can choose to use these carts, or simply   shop the old fashioned way.  Metro reports that about 12% of their customers currently choose to use the new carts, with   50% of those (or roughly 6% of the customer base) being over 60 years old.  Research has shown that this demographic   particularly appreciates being able to track exactly what the cost of the products in their cart are throughout the   shopping process. 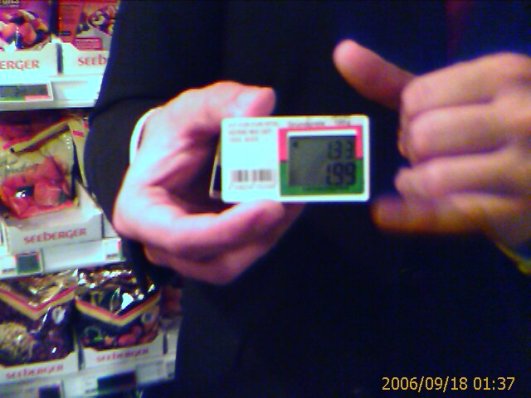 At the next stop they illustrated the digital price tags that were affixed to the shelves.  Each of these tags has its own   IP address and is updated remotely via a proprietary protocol.  Currently the updates are maintained centrally and occur   only once per night, but it would be conceivable that this process could be more dynamic. It’s common practice in Germany weigh your vegetables yourself in the produce section, selecting the type of vegetable from   a long list, and then print and affix a barcoded price to the sack containing the produce. In the United States this   process is usually performed by the checkout clerk at the point of sale.  The future store improves upon the German style   of shopping by having an optical recognition process incorporated into the weighing station.  The user places the produce   on the scale and the station should recognize what it is.  If it can’t recognize it completely, it narrows down the search   for you to a few choices based on charactaristics like size and color (instead of the huge full list) and lets you choose.    Based on your input, it not only knows what barcode to print out, but the station learns what the produce was and can use   this knowledge in subsequent searches.  While this was being demonstrated to us, a customer actually wanted to use it.    They were able to use the station easily and after a few touches of the screen were on their way.  It was great to see it   in action as opposed to a canned presentation.  Similar stations throughout the store were also able to give video   demonstrations about how to best prepare the vegetable (slicing avocado, for example) as well as provide the possibility   for printing out relevant recipes.

After the produce section, we moved through a hallway to a backroom where inventory is stored.  An RFID reader in this   hallway tracks the movement of goods from the backroom to the front room, primarily at the case level.  Only three products   are currently tagged at the item level (see below for a complete description), but approximately 80% of the products are   tagged at the box level.  In the back they also had a conference room where they demonstrated smart shelf technology.  The   display on the shelf showed the product name, quantity, and price of the objects it contained, and as products were moved   around, the display updated itself accordingly.  This wasn’t yet ready for general customer use, but it was a true   demonstration (i.e. not faked) of the technology.

Within the store 3 products were tagged at the item level for 3 different reasons.  Due to public disclosure regulations in   Germany, customers had to be informed about any products that were tagged.  The EPCglobal insignia was used both for this   purpose as well as to show that the RFID solution had passed the EPCglobal certification process. 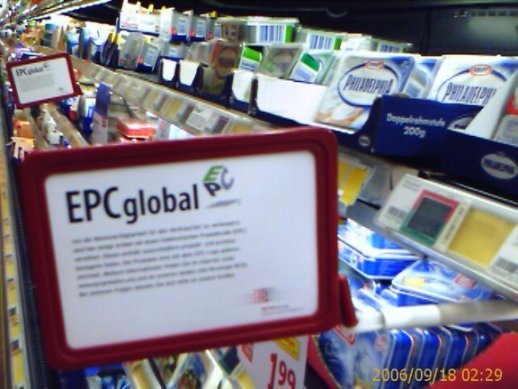 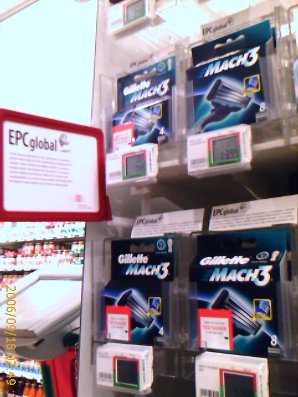 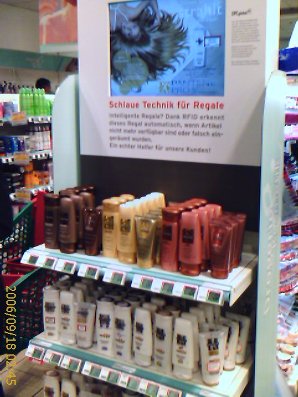 Above you can see the three displays of the products that are tagged at the item level.  The first is Philadelphia Cream   Cheese, which is tagged for the purpose of identifying the expiry date of the product in addition to the product itself.    Next to that are the Gilette razor blades which are tagged to deter theft.  Readers at the checkout counters can identify   products that haven’t been paid for.  Gillette razor blades, according to our guide, are the most stolen retail product in   the world, likely because they are relatively small yet high value items.  Apparently in normal stores the rate of   shrinkage is approximately 17%, but at the future store this rate is currently 0.  Not a single razor has been stolen, but   that might not be due solely to RFID technology, but also because of the mindset of the shoppers at the future store.  The   third picture depicts the cross-selling use case.  When a user picks up a bottle of shampoo of the shelf, the LCD begins   playing an advertisement for the corresponding conditioner.  Similar technology (albeit currently barcode based) was used   to listen to sample music tracks and watch DVD movie trailers. Item level tagging also puts tags on products that consumers will be carrying out the door and into their homes.  Due to   privacy concerns, users also needed a way to kill the tags.  The console pictured above is a tag killer, and when a tag is   pressed onto the platform it will be destroyed.  This operation is performed at a much closer range than normal read ranges   so that other tags are not accidently killed as they pass by the station.  Our guide was not able to provide us with the   percentage of users that actually used this station, which is a shame because I often wonder how much privacy concerns will   actually affect the average consumer’s behavior.

After killing the tag, we walked through the time portal back to the present and were left with a 30 minute bus ride to   contemplate what we’d just seen.  The real story here is not the applications of the technology, for the ideas are far from   inconceivable.  In fact, many of the ideas have been publicly discussed for years, and many more have been discussed that   weren’t implemented here.  The real story is that some of these ideas have actually manifested themselves in reality and   are being used by real people everyday -TODAY-.  Though not yet widespread, the tidal wave of new applications is coming.    The benefits are real and have now been proven, so executives would be derelect in their resposibility to provide them to   their customers.  Metro has provided suchproof points, indicating that their business processes are 12 to 17 percent more   efficient in this store.  For example, they are able to more efficiently ensure that their goods are available to sell to   their customers by reducing out of stocks between 9 to 14 percent.  New technologies like RFID can solve or at least   mitigate a host of business problems, as well as directly enhancing the consumer experience.  I don’t know about you, but I   can’t wait to getback to the future.