I am sitting here at the SDN community clubhouse and blogging about the extraordinary event that passed yesterday; SDN day. 300 dedicated SDN community members meeting up in order to build networks, discuss their challenges with SAP solutions, learn more and continue to make the SDN community reach even further.

Everyone I’ve talked to so far agree. SDN day was a great success and I believe we are constantly getting closer to the utopian form of such an event.

During the introduction Mark showed some of the inspirations for the form of SDN day, including both burning man and O’Reily’s Foo camp. He also focused on where the community is now, and presented some of the work done by several of the key members in the community.

The power networking session were next, and to me this was of the greatest value. The basic concept is that you sit down on a table with four other persons you don’t know. Then each of you do a quick introduction with what they are working/occupied with, and from there the talk can go anywhere. After 20 minutes you repeat the procedure and I think we did four rounds altogether. As expected there were a lot of interesting people, and it was truely amazing to see how people were facing similar challenges and could assist one another almost immediately.

The sessions that followed were all very good, and covered a wide span of topics. However, if I had to put my finger on something, I was missing some real in depth discussion between the session holder and the audience. Perhaps the sessions were too specific and had too much content to complete, I don’t know but I believe this is one area were we can improve even more.

My favourite session was “Web 2.0 Enterprise Application” held by Shel Finkelstein. It is very clear that SAP has some very comptent people working in this area and they are really interested in being one of the front runners in implementing and shaping Web 2.0 (which everyone agrees is a crappy name).

For one of the sessions, the presenter unfortunately was a no show. But what did the participants of the session do? Sit and complain ? Start a food fight with the delicious cookies? No, they actually got together and started working through the topic on their own, each contributing with their own experience and skill set. This is indeed truely amazing and something which again shows that we got something good going on here.

Shai Agassi made a surprise visit and as always showed his and SAP’s commitment to SDN. He talked about the community and how every goal ever set for SDN, had been exeeded with style by the community and the excellent SDN team. The problem now was finding the next goal which SDN would reach for.

Shai contrasted SAP’s focus on innovation with the views of Nick Carr, the writer of “Does IT matter”. At the same time he ruined the ending of the book by informing that the conclusion of Nick was that IT doesn’t matter, but I assume you wouldn’t read his book in the same way as a murder story. Nick Carr has been quite critical of Shai in past, and Shai jokingly stated that Nick actually had *****-slapped him on his blog.
So stopping Nick Carr and his negative outlook on IT’s future and innovation is now the new mission statement of SDN (truely a challenge worthy of SDN). 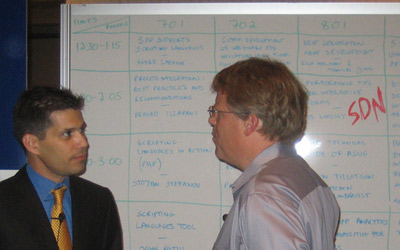 image by Matthias Zeller. Please note that the person on the right is not Nick Carr, so don’t hate him 🙂

I’ve heard today from several sources much more reliant than myself, that it was indeed a great event. People were especially in awe of the Limo buses. This sure is Las Vegas.

As always, I’ll do some shameless promoting of the SAP Facts site and the contest which is currently running; Humor@SAP Contest: Are you ready?. You might have heard about it during Mark’s introduction or in Shai’s talk, but now we need you to contribute with more facts and more votes! I expect to see a lot more facts regarding Shai, Nick Carr, *****-slapping and the general SDN community.

Hopefully, we can expand on the experiences made during SDN day here in Vegas, and reach out to get even more active contributers to the community.

See you next year!