To be more precise, row compression in DB2 uses a lossless compression technique with a static dictionary and works on a ‘per table’ basis. Static here means that the dictionary, once build, is fixed and will not change upon INSERTs or UPDATEs. The dictionary must exists before the table can be compressed. Creation of the dictionary and compressing the table is done in one step with an offline table REORG. To create the dictionary, the algorithm looks for repeating entries (or patterns) in rows. These entries may span over several adjacent columns. They are replaced by a symbol and the symbol is stored together with the repeating entries in the dictionary. During decompression (which is completely transparent to the database user) the DBMS replaces the symbols found in a row with the entries which are stored in the dictionary for this symbol. This way, a row gets shorter on disk and more rows will fit into one page. The dictionary itself is stored together with the table data and is not accessible from the outside. Upon access to a compressed table the dictionary is loaded into (DBHEAP-)memory for faster decompression. Dictionaries can not exceed the size of 150 KByte, they are usually about 75 KByte in size.

Here are a few other facts about row compression:

Assuming you are an admin running a SAP system on DB2 for Linux, UNIX and Windows, let’s see what you have to do to use row compression. I’m using again a SAP system ‘Q1I’ here to demonstrate the steps. The first step is to identify tables which are suitable for row compression. Naturally, the largest tables of the system should be considered first. In my system Q1I I identified table ‘/SAPAPO/MATLOC’ as a large table:

Like described in my first New Features in DB2 UDB V9 – Part 1 about new features in DB2 version 9 I used the table function ADMIN_GET_TAB_INFO to determine the size in KBytes of this table (there are no long- or LOB-columns in this table). 2075297 KBytes are 2026 MByte which means that some of you will laugh if I tell you that a 2 GByte table is ‘large’. Nevertheless let’s go on with this table in this example. To estimate the space savings which can be achieved by row compression, the DB2 command INSPECT can be used with the new option ROWCOMPESTIMATE:

Because of the ‘RESULTS KEEP matlocestimate’ option I can find the output of this INSPECT run in the file matlocestimate in the db2dump directory. As my system Q1I has two partitions, the partition number (000) is added to the file name. To read the output it must be converted first with db2inspf:

The two lines ‘Percentage of pages/bytes saved from compression’ tell us here that a space reduction by 87% is expected from row compression which is certainly a lot. (I can now admit that I selected this table as it constitutes a very good showcase for row compression :). Also, the complete dictionary size for the table (on this partition) is estimated with 56832 + 32768 = 89600 Bytes = 87,5 KByte. This table is identified as an rewarding object for row compression.

The next step is to switch on row compression. This is done with the new addition ‘COMPRESS YES’ for the ALTER TABLE statement. Note that this addition is also available for the CREATE TABLE statement. In both cases the table will not be compressed with this statement! Instead it is more that the specified table is now ‘eligible’ from compression. The field ‘COMPRESSION’ in the SYSCAT.TABLES view tells us if compression is switched on for a table or not.

The COMPRESSION field in SYSCAT.TABLES can also contain a ‘V’ for value compression or an ‘B’ for both (value and row compression). To actually compress the table data and create the dictionary an offline table REORG is needed:

REORG has the two new options RESETDICTIONARY and KEEPDICTIONARY. So it is possible to do a reorganization without running the compress algorithm again by retaining an existing dictionary. For the exact meaning of these options please lookup REORG in the DB2 Command Reference.

How successful was the compression? Let’s check:

Now you may think that every good thing has a downside. Do we have to pay for these space savings? It is very difficult to find a general answer for the costs associated with row compression. Obviously, we need more CPU time for decompression. If on the other hand your database is more I/O bound the savings from less I/O may (and in most cases will) outperform these additional CPU cycles. So there is no universal answer.

Otherwise we can examine how the various SQL statements are affected by row compression. Remember that the algorithm works with a static dictionary which is not changed by DML statements issued against a compressed table. From measurements conducted by our IBM colleagues here at SAP (thanks!) we found out that there is nearly no overhead for SELECTs and only a small overhead for INSERTs. UPDATEs to existing rows need a bit more attention. If the update changes the table data in a way that a compression symbol must be expanded to the original entries the row will to be larger after the update than before. As a result the row will not fit in its original location. If there is still free space left on the data page DB2 will do a page reorg to assemble the free space and fit the row back in. If there is not enough free space DB2 will need to create an overflow record (that means that only a pointer will be left on the page and the remainder of the row will be stored on another page). These additional operations will bring along some additional cost if they occur. You therefore may see a slight decrease in update performance compared to an uncompressed table. It very much depends on your actual data and your update frequency if you see a decrease in update performance.

Regarding the compression ratio, 87% like in this example is certainly a very good showcase. For the most tables which are suitable for row compression a compression rate around 70% would be more realistic.

Row compression is a very useful feature and it will be supported by various SAP products. 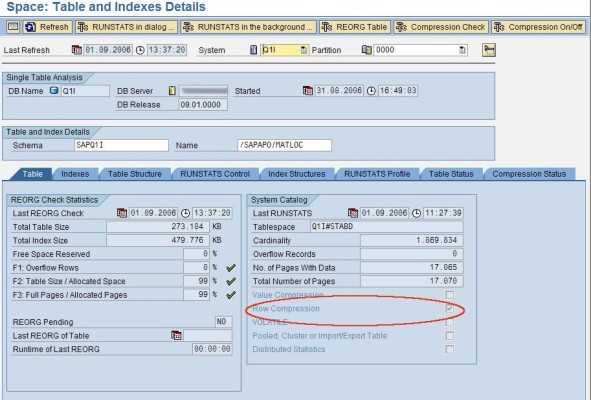 The ‘Single Table Analysis’ shows if a row and/or value compression is switched on for the table. The picture shows the state of our table after row compression took place. 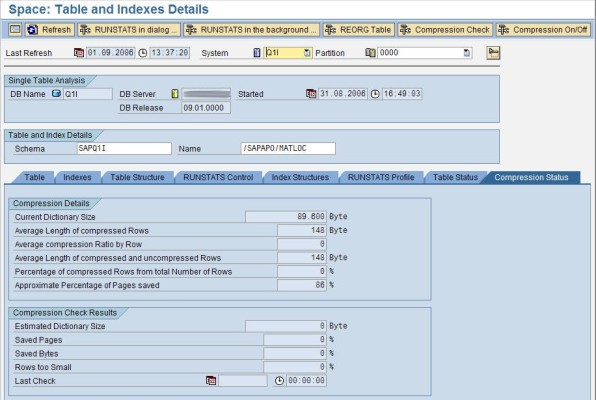 On the new compression tab you can find all information regarding row compression. All the things I did above manually (including the INSPECT run) can be scheduled very easy via the DBA cockpit.