This Blog simulates how we configured Tcode DBCO from i5/iSeries with SAP to non-SAP i5/iSeries. The procedure is based on Note 146624 and Chapter 18 of IBM Redbook “V4 TCP/IP for AS/400”. At the end, ABAP developers could use “EXEC SQL connect to ” and manipulate data remotely.

Our landscape is SAP (R/3 4.6C and ECC 5.0) on iSeries V5R3M0 and non-SAP legacy applications on another iSeries V5R2M0. The procedure can be referred as “Use of TCP/IP as of OS/400 release V4R4M0” in Note 146614, and it should apply to all V5RxMx releases. We are going to name SYSTEMA as SAP iSeries, SYSTEMB as non-SAP iSeries, and SAP system DEV with instance number 00 to demo the process.

Note 146624 lists it as the first step, and gives the procedure. But it is our decision that SAP could access non-SAP iSeries as QSECOFR, as all data on non-SAP iSeries is moved into SAP one way or another anyway.

Step 1.  Configure the host table on iSeries, if it has not been done previously

Step 2. Maintain the relational database directory, if it has not been done previously

Run WRKRDBDIRE on SYSTEMA, SYSTEMB should be listed with correct IP address or correct hostname. If not, execute ADDRDBDIRE (Add RDB Directory Entry) to add them. 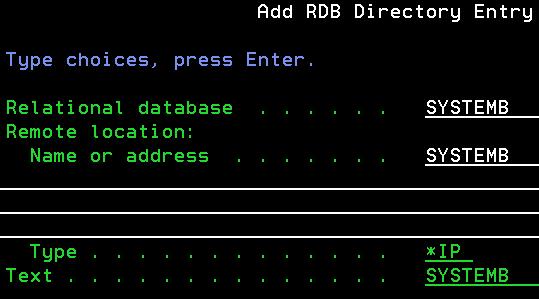 Step 3. Define a user profile for DRDA over TCP/IP

Check system value QRETSVRSEC to be set as ‘1’. 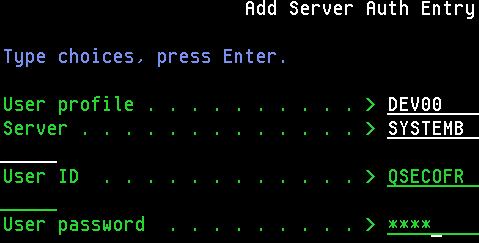 Logon SYSTEMA with DEV00 and start the interactive SQL with STRSQL or SQLUTIL, try to connection to SYSTEMB with “connect to SYSTEMB”, it should return with “Current connection is to relational database SYSTEMB”

If it doesn’t work during the first try, restart the following TCP service on both systems and try again.

Call Tcode DBCO from SAP, and put the parameters like below. 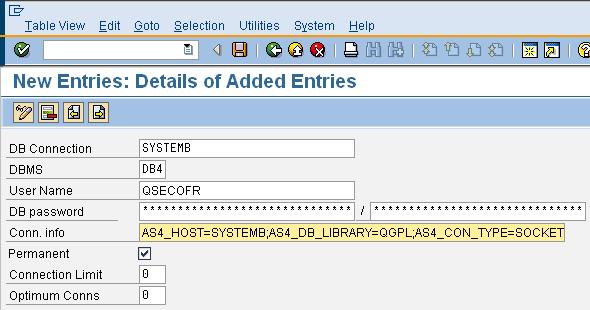 After restarting SAP DEV, “EXEC SQL connect to SYSTEMB” should work from ABAP.

Step 6. Make sure DDM and EDRSQL are started after each system IPL

For DDM, based on the redbook, you could configure through iSeries Navigator – Network – Servers – TCP/IP – DDM For DRDA, we added the following line in the QSTRUP program as recommended in SAP installation guides.

You should be all set!