Increased Functionality and Ease of Use: The “Ins” & “Outs” of MDMs new Transport Utility

The recent MDM service Pack (SP4) brings a useful export and import schema functionality that enables intuitive migration of selected schema objects between repositories. Schema object selection is possible at the table as well as at the field levels.

The attached screen shot shows a table add, delete, and modify in action: 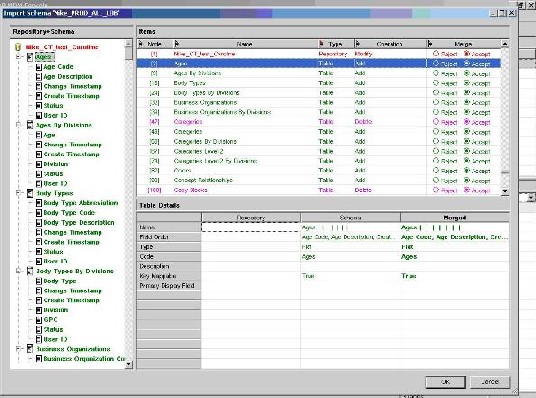 While a schema can be exported out of a live repository, you can import only into an unloaded repository. This is in line with the fact that structural changes can be applied only to a repository in an unloaded status.

Two important business needs that are easily addressed with this functionality are:

The ability to turn the migration on/off at field level is a key contribution of the transport utility. Objects built, as part of proof of concept or those that are in excess of business requirements need not be deleted before a project is migrated to production.

In this introduction of transport functionality, MDM has included most of the repository objects that are configured/created using the MDM console. These objects include

The list of objects that are transportable suggests a clear pattern- schema objects that are regarded as the structure of the repository, as opposed to the content, are included in the first release of transport utility. MDM regards all objects configured in modules such as data Manager, Syndicator, and Import Manager as repository content. Hence, taxonomical attributes, import maps, syndication maps, validation expressions, and workflow do not appear as transportable now.

Of the schema objects MDM regards as repository content, transport utility on validation expressions, maps, and taxonomy would be of great use since errors in manual transport, especially in case of expressions, is high. The transport utility, with the inbuilt schema compare screens that show differences between the source and target, increases efficiency several fold. Other items that would be useful additions to the transport utility include security (roles and users), ports, client systems, and work flow.

Former Member
August 5, 2006 at 7:25 am
This is a nice introduction to what is coming. However, the bad news is we have to wait for the few important functionalities like transporting Validations, Workflows ! Imagine the pain we had with 1200 validations in our repository.

Savi: Nice to see you back after a long long time.

It has been so busy with go-live of one phase and ramp up of the second.  From now on, I will try to be more regular and keep up with you 🙂

Former Member
August 12, 2006 at 1:40 am
Its a great relief..Transporting tables and the fields manually is indeed a great problem..
I recently had answered a question on the forum on similar topic, where i asked the SDN folk posting the question to go ahead with the job manually..
This shall be really helpful in moving schema from development to sandbox to production..
Thanks for the blog.

It was useful information...

Former Member
September 22, 2006 at 8:28 am
The transport utility is a great addition to mdm.  I was wondering if anyone has been able to compare two disparate models.  I've tried but I get the following message: "The schemas cannot be merged because the repository schema was modified since the last schema export."

Which OS are you using: WIN or UNIX?  Schema transport has some issues on HP-UX platform that SAP will be fixing soon.

Secondly, what did you mean by disparate models? The purpose of the schema transport functionality is to compare disparate models.  In my example, I have a productive model that has 50+ LKs, and the main table (with default fields).  This is the target.  The development model has main table with 70 fields, 5 qualified models, and a bunch of new LKs.  This is the source.  I was able to take the new structures, and place them in the target with no issues on WIN platform.

Former Member
September 22, 2006 at 12:28 pm
Savi,
I am on a WIN environment too.  Are there restrictions or comparisons done against something like the main table name?  Have you seen the message I received before?  I am trying to transfer fields from one repository to another that were developed seperately and have different unique ids under the covers.  Is something like this giving me problems?

Thanks for responding,
Linda