0 0 236
Preparing a new XI environment up and running with all the relevant configurations done is a big task where there should not be anything which is missed out. Am trying here to put down some important points which we have kept it as checkpoints when we made our QA/Prod systems ready. Consider an XI project where we have the following system landscape. 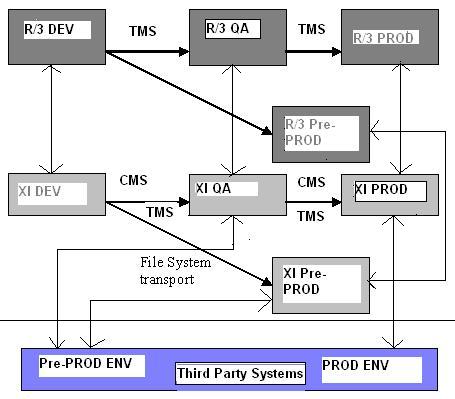 Fig1: Figure of the server architecture. In this scenario all the XI objects developed will be going to the testing server and from there to Production. Here we also have a sandbox/pre-prod which is equivalent to the production environment. This is built to support the production issues once the system has gone live. This system was also helpful in doing the testing for the time travel environment support for certain interfaces. We can consider the following four as the main activities and then we’ll go in detail for each one of them. 1. System Check & Settings 2. Configuration & Tuning of Integration Server 3. Setting up transport 4. Integration Directory Configurations. 1. System Check & Settings First of all as we know we need to do the system check & settings done as per the SAP installation and post installation configuration guide. Here the important configurations like the following have to be taken care and have to be done at high priority. a. RFC destinations b. SLD configuration c. Exchange Profile parameter d. Creation of tRFC ports for ALE communication e. Proxy configurations. 2. Configuration & Tuning of Integration Server This activity is very crucial as its the point which where the following things are done and is important in terms of the performance of the server & interfaces. a. Configuration of Integration Engine involves the tuning of the configuration parameters like the registering of the queues, etc. b. Business System & Technical systems in SLD are the most important ones as this is linked to the transport settings that has to be done and once imported, the Business Systems configured for the test environments will be the name of the sender/receiver systems appearing in the transported configuration scenarios. c. Tuning of Integration Server, ABAP & Java profile parameters Now we have almost completed 50% of the huge task of setting up the XI server and making it up and running with the connections established to the SAP R/3 system. 3. Setting up transport Setting up the transport is another task which we need to accomplish so as to get the objects developed transported to the QA/Prod system or we can say as a milestone that we have to achieve as part of the system build activities. Here as per the above diagram, we had our transport strategy defined as which ever transport is going to the sandbox will be done using file system transport whereas the main transport path of the Dev=>Test=>Prod will be done using CMS.
The advantage of maintaining a sandbox system(pre-prod) which is having the same configuration as in the PROD system will be something like we can try out the interface before moving into the production. Say if there was any ticket and a particular interface is getting moved after correction, we can always be on a safer side by doing another round of testing as in the same PROD environment.

The following are the subcategory work items that fall under this section. a. CMS Setup b. Importing Products and SWCV from Dev SLD c. Creating BS for systems in QA/PRD environment d. Maintaining Transport Targets e. TMS Configuration for applying SAP notes and ABAP Transports which got implemented in your ABAP stack of WebAS on which XI is running. g. Deploying Java Modules (Adapter modules and Proxy modules) using DTR. h. Customising requests for Classes and interfaces from the development servers of the other R/3 systems connected. i. Proxy Registration and activation. j. Transporting IR and ID objects. k. Support team user profile creation & activation 4. Integration Directory Configurations. Adapter configuration is the main task in terms of Integration Directory configuration as part of making the XI system ready for QA/Prod which involves activities like the FTP user details, polling interval, directory path, file names, etc. If you are on SP15 and above, the advantage of picking the files from multiple locations can be used.