There are no invalid characters in texts of infoobjects!

There are several wide-spread delusions (I call them myths) in SAP BW world that even some experienced BWers share. I’d like to list these myths and make some comments.

Myth 1: Everything said (in documentation, help, notes etc.) about valid and invalid characters in SAP BW 3.x is equally applied to both, infoobjects texts and their characteristic values.

It is very well known that the most of errors occurring during data load in SAP BW is related to invalid characters in data inflow. All these errors happen with infoobjects characteristic values. There are some settings need to be made in order to load data with lowercase letters or foreign language symbols. By default, all these precautions spread on infoobjects texts also. It produces the other myth.

Myth 2: Infoobjects texts accept limited number of characters and special settings should be made in order to load texts with lowercase letters.

I’ll show that these two myths are simply delusions. I made a special experiment. First, with Visual Basic I created a txt file with all available characters with ASCII codes from 0 to 255 (non-Unicode system). It doesn’t matter that characters with hexadecimal code 00 – 1F are replaced in the file by ESC symbol, the same happens during file saving as CSV or TXT. Here is created file. 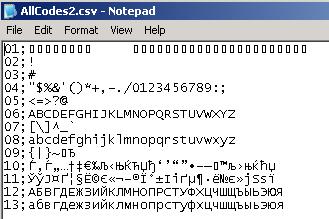 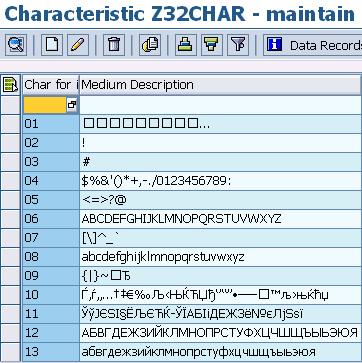 As one can see, all data have been loaded without any problems. It proves that infoobjects texts accept ANY CHARACTERS regardless of any settings. Hence, use literal data in infoobjects texts (instead of characteristic values) whenever possible and acceptable. It’ll relieve you from many problems with data loading. The list of myths related to invalid characters in characteristic values is here: Invalid characters in SAP BW 3.x: Myths and Reality. Part 2.

Former Member
July 10, 2006 at 11:01 pm
The cyrillic letters are only available if your system supports Unicode which is available as of 6.20 (BW 3.5). Otherwise you have some problems displaying these characters. Nevertheless a very useful blog. Great job!

i want to get this data into the cube....

even i have tried RSKC but no use any conversion roune should be written for these symbols usually we get it in insert symbol in word so ..........

I have query on unicode. SAP has given codepages to handle the unicode environment, what is the exact use these code pages.

As per understanding, If code page is 1146 (simplified notation, German style) to convert the german style data to simplified data so that SAP BI can recognize that. In SAP i seen function module SCP_REPLACE_STRANGE_CHARS to convert Special characters and national characters are replaced in such a way that the text remains reasonably legible.If i give input data as Á£Ä Z=Ä= =Ü to that function module,then it giving output as ALAe Z=Ae= =Ue. Á converted into A and Ä converted into Ae. How this conversion taking place. Where these mapping is maintained. If i want to handle multiple language and multiple special chars in loading, how can shift b/w the code pages, because each codepage will do certain conversions. conversion of german, conversion of latin, conversion japanees have individual code pages.

Please throw some light on this.
Regards,
Rajanikanth Reddy

Article indispensable for any analyst BW, our community needs more materials as well.

It really helped, Thanks Eugene