Weaving a net over Kodaikanal

Kodaikanal,also known as the Queen of hills is a charming hill station located in the Nilgiri hills, in TamilNadu.Her sylvan beauty, soothing weather, and bracing air, makes her an amazing weekend retreat.

Twelve of us, from the Netweaver team went on a trip there, and had a lot of fun trekking our way throughout the mountainous forests. The two day trip, turned out to be too short albeit anything but boring with nobody wanting to get back home. For once, SDNing took second place in people’s minds.:)

The best phase of the trek was when we had to walk down a cliff side, which was pretty slippery, due to the incessant rains to reach a mountain viewing point called Dolphin’s nose.One slip, one letup on either of your sides, would automatically issue you, a one way ticket to Periyakulam, a village 1500 metres below.Scary thought!The feeling of elation at the end of that, could only have been surpassed by a huge sense of relief!

The other places of interest, which are definitely worth a mention are Guna’a caves ( a cavern whose entire depth has not been explored yet), Kodai Lake, and the pine forests where endless pine trees for as far as u can see, makes it an ideal spot for taking snaps. A few from the Wipro Netweaver family 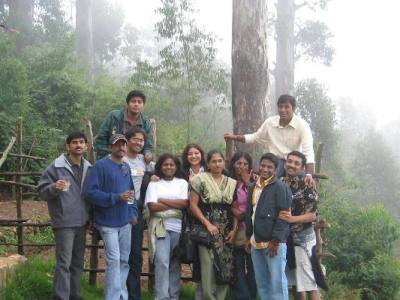 All in all, the Wipro SAP Netweaver team had a whale of a time together, and definitely looking forward to the next trip.For now, its back to SDN.

Thank you and best regards

Marilyn Pratt
June 26, 2006 at 8:15 am
Really enjoyed the pictures and your poetic text.
You are welcome to share those pictures and more in the SDN Group pics that are out there on Flickr.

It would be fun to start seeing the SDN T-Shirts pop up all over the world.  Anyone going to somewhere exotic and fun?
Park your SDN Group pics here