Administrators always want to know who is doing what in the portal — who is entering the portal, what iViews or being run, which users are viewing which pages.

The Portal Activity Report gave you some of this information; now, since SAP NetWeaver 2004 SP Stack 15, it gives you more, and it is also easier to set up.

The changes I’m going to describe were first put into SAP NetWeaver 2004s, and then into 2004 for SP Stack 15.

First, a quick overview of the Portal Activity Report. 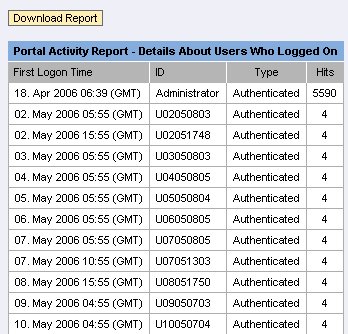 You create a portal activity report by creating a new iView from the Portal Activity Report template, and then you open the iView for editing to configure it.

The editor has two panes:

The following is the editor for a Portal Activity Report iView: Just a few words on how the Portal Activity Report works.

The data collection service monitors activity in the portal, and creates a record in the portal database for each action, let’s say, each time someone logs on or views an iView.

Every so often, a standalone application aggregates the data, getting rid of the raw data. The data can be aggregated for different time periods, for example, for each hour, day or month, based on the configuration of the aggregator application.

Here’s a quick overview of the process:

The following are the major changes for SP15:

Former Member
July 20, 2006 at 9:22 pm
Thanks, Daniel. Good to know that the aggregation is now automated, less sysadmin work needed.

Do you happen to know whether there is some out-of-the-box method to measure clickthroughs and clickstreams? Or the download rate of individual files? I'm trying to assess if there's any way to implement web analytics and this Portal Activity Report seems to be the only thing that vaguely resembles that.

I am not familiar with any metrics like these. I have sent a message to development on this matter, and will post their reply.

Thanks for acting on my reply.

The target audience for clickthroughs are really the content creators: to them, number of users logged in or number of pages served may not be sufficient.

Such a clickthrough will be an indication of interest for the event, which allows content creators to assess whether the email is successful or not. Clickthroughs that translate to event registration is a positive KPI for the content creator.

So far, that's just one way to use web analytics via a simple clickthrough mechanism but I'm sure you can see the potential benefits it brings to demonstrating the ROI of a portal implementation.

As good as these reports are, I can't find a way to sort them.  When I create a report for most visited pages and iViews, I'd like to sort from the most to the least number of hits.  Am I missing this piece of configuration somewhere in the properties?  Is it available?

As of now, you cannot sort the reports.

My understanding is that for the next major release, there will be much more flexibility in creating reports. In essence, data will be collected and users will use BI to create any type of report they want.

Former Member
October 3, 2006 at 10:45 am
Hi, thanks for the article. However I have a question: you said, "In addition, the report that shows how many times each iView was viewed, also now shows which users viewed the iView."

I'm wondering how one would set the iview to do this, as I don't see this option in NW04 SPS 16.

Former Member
December 21, 2006 at 11:51 am
Although the portal activity report is improved, I still feel it's not mature enough to really serve it's purpose. SAP suggests going against the database tables to pull more information and display in a custom application (WebDynPro?). Did anyone do it?