First a short definition of a Software component which will be used later on…:
“Software components represent the reusable modules of a product. You can upgrade them or install patches on them.”

The company has a business case for receiving sales orders from customers by XML. Also has been decided that the XML format has to be CAP (*1). The sales orders will be send to SAP R/3 by using the IDoc ORDERS.ORDERS05.

Remark *1: CAP stands for Common Aftermarket Protocol, a set of standard messages to improve the electronical exchange of information between manufacturers and buying groups in the European Automotive Aftermarket. For more information see http://www.cap-standard.com/.

The following Repository Objects are needed:

Before creating these Repository Objects in the Repository you first need a Software Component Version.

In the picture below a single Software Component Version is shown, which consists the Sender Interface, the Mapping and the Receiver Interface. 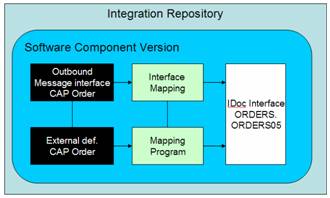 SAP advises to assign a Software Component corresponding to the business systems involved.

Administrating the Interfaces to the Business System

The link between Business System and its interfaces will be realized by linking the Technical System to the Products and linking the Products to the Software components. This is all done in the SLD. In the Repository the Software Components (Versions) will be imported. In the picture below these links are visualized.

By using just one Software Component Version the Interfaces belonging to the Business System cannot be administrated correctly. The picture below shows the incorrect relation between the Receiver R/3 Business System and the Message Definition and Interface of the CAP Order. 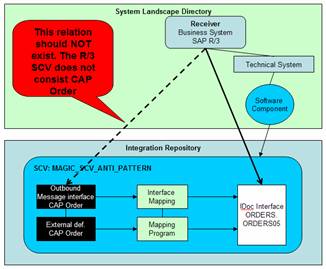 The picture below shows the SMR SCV Model. So the Sender Interface and the Receiver Interface are defined in two Software Components. 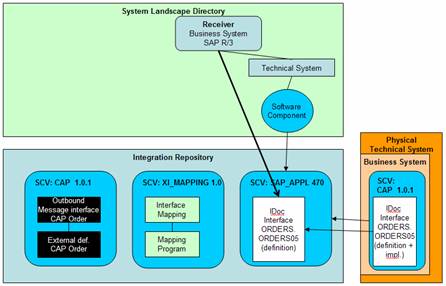 The Sender Software Component only contains the interface definition and message interface of the sender.

The Receiver Software Component only contains the interface definition and message interface of the Receiver.

By splitting the Sender and Receiver Software Components it is possible to connect the Receiver Business System to the Receiver interface only.

For the IDoc ORDERS.ORDERS05 you should use the Software Component SAP APPL. The extra advantage of using this standard SAP Software Component is, that you don’t have to link it to your Technical System, because this will be done automatically by configuring transaction RZ70 in your Business System.

(Remark: when Sender and Receiver both use the same Interface version, and you did make a mapping programming, than you will have at least two Software Component Versions. One for the interface and one for the mapping.)

Mappings in a separated SCV

You could start difficult discussions about putting the Interface Mapping and Mapping Programs in the SCV of the Sender or in the SCV of the Receiver. But we think that the mapping is not a part of either one of them. There are two reasons for separating the Mapping.

1. The Sender and Receiver Software Component should only contain interfaces correspond the real business system.

2. The mapping is a specific integration task uniquely running on XI. It should be managed by its own XI software component. (Example SCV name: DXIE_XI_SALES.)

The Actions have been placed in the Sender and Receiver SCVs, so that these actions could be reused in other Point-to-Point connections.

However, we are looking out for comments and additions and your experience on separating SCVs. So please do not hesitate to comment on this weblog.

Coming next in the D-XIE soap:

Why shall we use encryption, signing and compression? Meet you next time in de D-XIE soap…

Thanks to all D-XIE members, especial Robert Eijpe and Hans Gmelig-Meyling, both of NL for Business, for helping me writing this weblog.

Really good blog, that will help a lot of people to start thinking about how to set up their SWCs.

I do like the threefold structure proposed and actually we have used that for various XI implementations at huge companies as we think, it is the best way to achieve maximum reusability. And reusability is the key point to lowering the TCO.

Thank you for question.

When you have just one XI system, than one Product Version should be enough.
(for example DXIE XI 1.0)

But when you have more than one XI system, than you could make a generic product and an XI system specific product.

The product version of the generic product is very important.

When you change on system A the SCVs of the generic product DXIE XI GENERIC, than you should make a new product version: DXIE XI GENERIC 1.1. You should also make new SCVs (for example DXIE_XI_SALES 1.1).

(Remark: The name GENERIC, A and B are just examples. You should give your PVs and SCVs a more meaning-full name.)

So the answer to you question:
- Yes, you should have at least one Product Version.

Nice to be able to benchmark our own designs versus some 'best practice' examples.
How would you in general model the middle component ( mapper ) , running on the 'XI product'.
Would you use 1 SWCV ( representing XI in general ) for all interfaces and then use e.g. namespaces to organise across different interfaces or would you use 1 SWCV ( representing XI for the specific inteface ) for each interface ( resulting in many , many SWCV after a while in a busy landscape )

What could be other interesting usages of the namespace level ?

Sorry for my late answer...

For now we have choosen to split Mapper - SWCVs at business process level.
So we have used:
- DXIE_XI_SALES
- DXIE_XI_PURCHASING
...and so on...

So each XI SWCV has one Integration Scenario.

One package for the Integration Scenario:
http://dxie.com/xi/sales/Purchasing/IntegrationScenario