Recent forum posts on Receiver Determination and XPATH, if you might have noticed have opened up more options for XI developers to ponder on. This weblog will look into some ‘enhancements’ we can do to the XPATH expressions that we use in the condition editor during Receiver Determination.   Lets first start with one of the recent Re: Conditions in  Xpath (Receiver determination).

To acheive such a condition we could actually go in and change the XPATH expression to what we choose, a special thanks to Stefan Grube who suggested the same.

Lets explore those options. Say I have a Message Type as shown below; Refer the below screenshot; 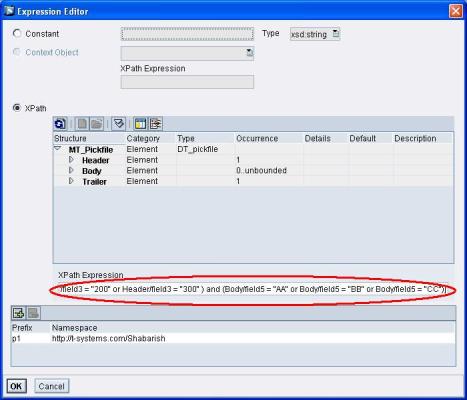 As suggested by Stefan in the post, we can write a whole XPATH expression in one line and use the EX operator for this purpose. The important thing to consider is the Parent node.

Similarly we could use various such XPATH functions like compare(), substring(), string-length() etc according to the needs of design.

On a second thought we could even change the scenario in this XPath to show the path (Multiple Receivers) and pull out the BPM. Well that’s for you to try out !!!! 🙂

Once again you have presented contents in easily accessable and readable way.

Where I can create expression for XPATH mentioned in your blog. I am bit confused in how to put this condition in IR?!.

Please suggest me how to get into screenshot displayed in your blog.

Can you please check the discussion below:-