I have to apologize for this post being a little bit dated (the event was actually on February 19), but it doesn’t work nearly as well without the picture, so I think the wait was justifiable.

I recently went to the SAP Tennis Open in San Jose, and as I was walking through the parking lot I saw a traveling billboard crawl by. At first I thought it strange that SAP would employ a traveling billboard when the SAP brand name was already so pervasive in and around the arena. I even made a joke that it would be kind of funny if it wasn’t SAP but a competitor instead. That was, in fact, the case. Salesforce.com had sent the following message in faux-dictionary style via a billboard on wheels: 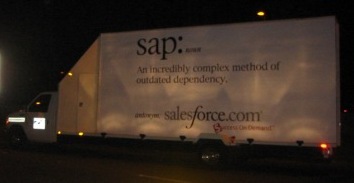 This is a bold move, and I have to take issue with their message. They apparently haven’t heard that SAP has changed their ways. SAP’s new NetWeaver platform allows our customers to be flexible, agile, and incorporate whatever third party tools they want. And wasn’t salesforce.com recently responsible for halting business for their customers for a full day due to an unexpected outage of their software?

Fortunately this didn’t ruin my day though, and we proceeded inside to the Ace club. The Ace club was a private VIP area for SAP customers and employees with a wonderful complimentary spread. They had everything from Burgers to fruit plates to Sushi there, and it was all very tasty. After grabbing a quick bite we headed in to find our seats.

At first I wasn’t impressed because we were in the second tier in the back, but the seats turned out to be great for gauging how good a shot was. And there were a lot of good shots. I guess that makes sense, after all, I had gotten lucky and these tickets were for the finals.

The first match we watched was Andy Murray against Lleyton Hewitt. They traded first sets rather quickly, each one showing the other who was boss, but Andy one the second set and carried the momentum. I’m not a fan of Lleyton at all (his barking tactics annoy me) so it was good to see Murray take him down in the third set. The third set was exciting, going to a tie breaker, and would have been even more exciting had we known that it was for the match (and tournament). I had anticipated the standard 5 set match, but I guess they only play 3 there.

The next match had McEnroe and his partner Bjorkman playing against Goldstein and Thomas. I was really looking forward to this one. I remember watching McEnroe back when I was really into tennis and it was great to see him back in action, and live! I have to admit that I think his partner really carried him. The highlight of the match for me was seeing McEnroe up on his old tricks and arguing with the umpire again. It didn’t even matter to me who would win (McEnroe/Bjorkman in another outstanding tie breaker) at that point.

It was a great day made possible by SAP. I really enjoyed myself, and I enjoyed myself even more knowing that it was put on for a really good cause. I had a great time and can’t wait to go next year. I hope you’ll join me and help contribute back to the community while enjoying the great competition.