Hi, folks! It’s time to write a blog again. I’ve been “offline” for quite a while now. The EFP (External Facing Portal) features have been out in the market since October 2005, and I’ve heard a many “ooohs!” and “aaahs!” so far. What people like most are the flexibility they gained with the new and enhanced JSP taglibs and the performance improvement they can achieve when implementing a truly light portal using all the bells and whistles that the EFP features offer.

Just once again here the main features in short form:

In this blog series I will give you some real life examples of how to use the taglibs. This is the first of four blogs covering this issue. The following topics will be covered:

But first I will start off pleading you to write “good” HTML: When coding HTML/JSP prioritize modern, semantic HTML and CSS layouting over table rendering techniques!

The so called “table rendering” technique makes exhaustive use of tables and “spacer GIFs” for achieving certain look&feels. It dates back to the time when browsers like Netscape 3/4 and Internet Explorer 3/4 were widely spread and the CSS standard wasn’t yet adopted well by those browsers. So webdesigners had no other choice but to use (nested) tables and spacer GIFs to implement a given layout. Marketing was pleased, the user had a nice web experience and everything was fine.

The only big problem with it is that it blows up the code and makes it hard to maintain and – often more important – inaccessible for certain user groups.

Nowadays with the new generation of browsers and the good adoptance of the CSS 2.0 standard the reasons are gone! You can have the same layout with much lighter and more accessible code when you separate the structure/content (HTML) from its presentation (CSS). Furthermore you are invited to use HTML tags that have a semantic meaning, for instance:

rather than mixing content and layout in a chaotic manner:

Let me give another example. The screenshot below shows a layout that has been implemented twice using the two techniques: 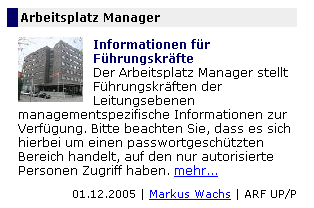 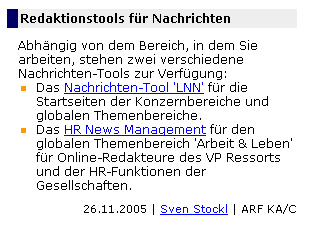 Only by looking at both HTML codes you will notice the difference. One other benefit will be clear by comparing both versions: The second code takes up only half of the size (in KB) of the first one. This is mainly due to replacing the tables and spacer GIFs by other HTML elements.

But please don’t get me wrong: HTML tables are still good for tabular data!

Now, tell for yourselves!

Developing accessible web frontends by choosing semantic HTML over table rendering and separating structure/content (HTML) from the presentation/layout (CSS) is not only a new, modern paradigm to be followed just because it is hype. It should be taken for granted in any case!

All of the following taglib examples are therefore based on semantic, accessible HTML using CSS-based desing for the seperation of structure and presentation.

If you’re interested in this issue you’re welcome to graze through the following sites:

In Part 2 I will give you the first examples: a hierarchical breadcrumb and a vertical tree-navigation. Bear with me!