We started our pilot by getting some of our most technical people, both Portal and BW folks together and going to a few days of training at the SAP offices.  The people selected as the technical staff for this project were some of the more, how should I say, “battle hardened” SAP technical people we have.  These are the type of people who have bled with BW since 1.0 and tried to get a production portal up with Workplace.  We sat down to a very brief introduction and then set to work on doing some hands on scenarios.

The product worked flawlessly, nearly everything we did worked perfect and we were not just following along on the exercises.  As all technical folks do — we wander off into the “seedier” areas of the product; the areas where people have not tested so well and yes, there were some quirks but nothing major.

The “Storyboard” which is the main developer interface is simply amazing; it uses SVG (the Adobe SVG plug-in to be exact) to produce a wonderfully response and pretty interface all in a web browser.  If all SAP screens looked and worked like the Storyboard, I think it would silence all the critics (including myself) who say most screens are unfriendly and hard to navigate.  For those who have never seen it, most of the time you are dragging and dropping components onto a workspace and linking them up with lines.  Usually drag and drop operations like this are CPU intensive because they are managed by pure javascript, however, in VC they are managed by the SVG plug-in, which keeps CPU utilization down. 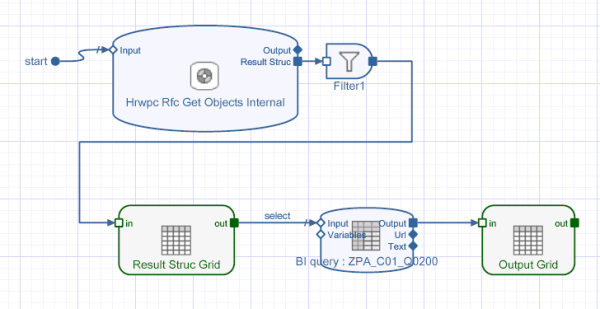 Making an RFC call and displaying those results in a sortable, downloadable, column resizable table takes all of 10 seconds.  You can then create a link so that when the user selects a row of your table it passes that information to a BW query and that results appears in a pretty bar graph, which takes another 20 seconds to build.  Your reward for your 30 seconds of work is a very attractive looking Flash movie that goes and fetches the data out of your system for you and displays it both in a table and in a pretty chart.  Now, I’m a pretty fast programmer and there is no way am I calling an RFC and creating an ALV grid as fast as that, forget calling a BW query!

The other great selling point of VC is the pre-built analytics models.  At the end of the training we were able to start to play with some of the things that SAP gives you for “free” with the tool, think of these as business content for the VC.  These models are based off BAPIs and business content queries in BW.  If you already are using the content cubes and queries that are referenced in the model, it is trivial to roll the applications out.  Just download the code swap a few system names and upload it to your portal and you are done.  However, because of the simplicity of the interface even doing a substantial amount of modification to the models is easy even with just a day or two of training.

My next couple of blogs will be dedicated to doing some more in-depth digging into the guts of VC.  Looking at a few things e.g., how end user experience will scale over a WAN to checking out some more details of SVG.