Phantom of the Opera

My previous web log had only just come out when another 2.5 episodes in the browser saga saw the light of day: Camino 1.0rc1 and Opera 9 Technology Preview 2. The remaining half episode is reserved for a preview of Songbird 0.1, a new media player. I’ll tell you later why I consider this to be a browser too. But let us start with what, at first sight, would appear to be the least interesting one: Camino.

MacIntel
It already starts off strangely. Despite the fact that it can be downloaded, there is no reference to it on the home page ( http://www.caminobrowser.org/). Notice the URL itself too. It no longer resides on the Mozilla site, despite originating from there and having links on their site. This already sounds rather familiar, don’t you think (see SeaMonkey)?
Update Feb 15th: The final 1.0 version can be downloaded here.

What are the new features? Well let’s have a look at the highlights

Apart from the MacIntel support there seems to be nothing spectacular in this version. Why this release then? Well, I’m afraid that one might have to come to the same conclusion as with SeaMonkey. Is there a reason to opt for Camino above Firefox? After all Firefox 1.5 has now better Mac support. There might sill be a reason. Apart from also being based on the Gecko engine, it makes use of Apple’s Cocoa user interface, called Aqua. Cocoa is an API for OO native application development. It is derived from the OpenStep/NextStep environment on Next; you know the futuristic and well ahead of its time (and thus flopped) computers from Steve Jobs, when he left Apple 10 years ago. More info. on Cocoa can be found at Apple’s developers site.
The result of using this UI can be seen over here: 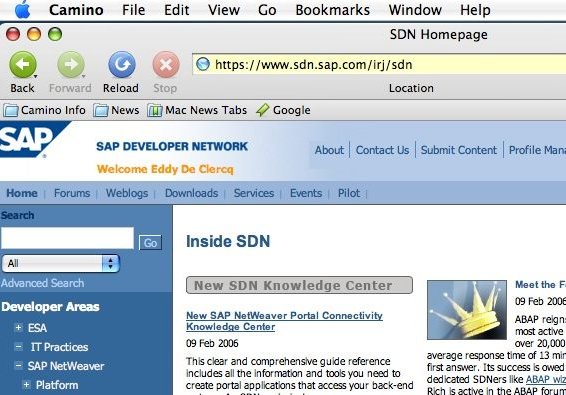 Sound, no vision
I wanted to mention this because it’s rather special tool . It calls itself a web player, but it is in fact a sort of hermaphrodite built from Firefox’s browser engine. This fact means that it inherits goodies such as extensions. It’s also open source and runs on a multitude of platforms. It also claims to play anything but I wouldn’t agree with that. While it is certainly true for audio (I didn’t find any format that it didn’t play), it doesn’t play any video. It simply opens a video file and plays it, by which I mean that it only plays the sound. You will not see anything. I hope that this facility will be included soon. I’ve seen many comments saying that it’s a copycat of iTunes. I admit that it has at least some comparable properties. To try this out, I tried to retrieve and play the SDN podcasts. As you can see on this screenshot it proceeded painlessly. 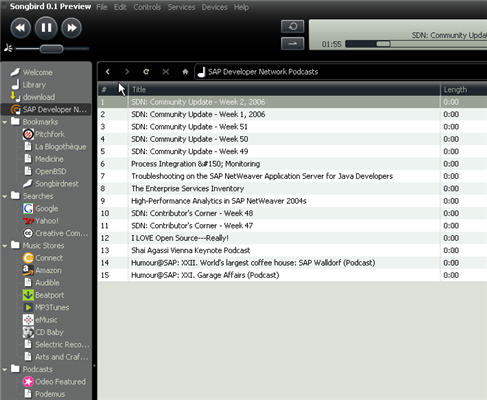 Despite not being fully matured yet, and a bit buggy, I have already started to like this better than iTunes, which is focused too much on Apple’s business and lacks some features.

Operetta
For the grand finale, I’ve been downloading and testing Opera 9 Technology Preview 2. That went smoothly, since the installation file isn’t even 4Mb (3.99 to be precise). That’s a big difference compared to the others (MIE 7 : 11.28; Firefox 1.5: 4.99). Starting Opera also goes like the clappers compared to Firefox and during the testing I didn’t have any crashes, which is remarkable when compared to my experiences with MIE 7 beta.

Let’s have a quick look at the new features: 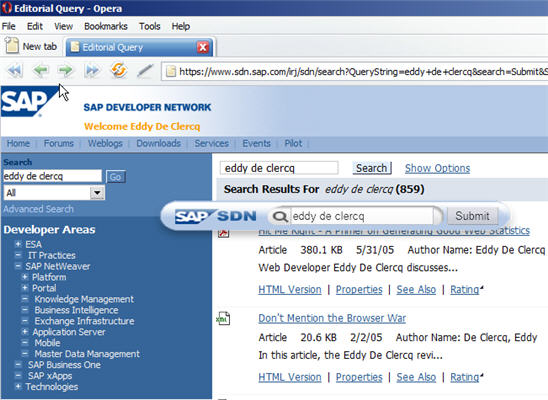 Btw, if you like to have the Bittorrent and widget goodies within Firefox, you might want to have a look at the FirePuddle and Firefoxit extensions respectively.

Catch up SAP
So what has all this to do with Netweaver I hear you say? A lot, if it was up to me. Unfortunately, in my opinion SAP doesn’t seem to think the same way about this matter. It is either rather reluctant or conservative in its support of browsers. It was like in the old days with the Ford T; one could get it in any colour, so long as it was black. SAP revealed its browser strategy last year in May and finally plumped for Firefox. We’re now 9 months later and it seems that SAP hasn’t caught up with the browser evolution.

If we take a look at the NW200s PAM (Product Availability Matrix), Firefox 1.0 and MIE 6.0 are the only constants in browser support. Some subparts such as Enterprise Portal support Mozilla 1.7. There’s absolutely no sign, for example, of Netscape 8, which is nearly a year old now. See (N)e(t)scape from Alcatraz for more info.

SAP leaves everyone in a state of confusion when it comes to info concerning their browser support. Note 881967 on Browser support for InternetSales 5.0 B2B / B2C speaks about partial support for Opera and Konqueror. However, if we read note 81069 we see:

“Following browsers are supported by SAP AG:
Microsoft Internet Explorer >= 5.5
Netscape >= 7.0 (except version 7.10, see below)
Firefox >= 1.0
Mozilla >= 1.7.5
Note: Due to severe rendering problems in Netscape 7.10, it is not possible to support this browser version.
If you access the SAP Service Marketplace with a version which does not support “Dynamic HTML”, your browser is trapped at the start. The system displays a message with the request to update your browser.”

What do they mean by this? Is SAP saying that a browser like Opera doesn’t support DHTML? Is the latter the reason for not supporting this browser? I don’t think so. My feeling is that the SAP UI web interfaces depend too much on proprietary code. Can it be done otherwise? Of course. As mentioned in multiple articles and web logs, browser compatibility is considered to be of paramount importance. Our oldest BSP applications (4 years old) are still running fine on all browsers (including the buggy beta MIE7) and they’re no more than ordinary HTML. We have only had to change our code once because of some incompatibilities between Flash and Mozilla. It is possible to create nice and nifty cross browser interfaces. You don’t need to believe me. Have a look at sites like http://www.cross-browser.com/ or have a look at these tutorials: http://www.htmlcenter.com/tutorials/tutorials.cfm/121/dhtml/ and http://www.wdvl.com/Authoring/DHTML/CB/.

If you find all this too difficult: not using proprietary code is always a good start and a must in developing cross browser sites.

Conclusion
Opera is a fine browser that can compete with the others. In fact, it is even better than the others on certain fronts. It was a source of inspiration for other browsers to implement features in the past and still will be in the future. Firefox 2, for example, will also have the saved session feature when it is released later this year.

I hear a lot of market share arguments when it comes to not supporting Opera. I have my doubts on this. First, browser detection is very difficult and I always have reservations about these kinds of statistics. Secondly, most of these statistics come from the U.S. . The ocean is sometimes (very) deep when it comes to adopting things. We might come to a completely different set of conclusions if we looked at more regional figures. I must admit that even then the share isn’t spectacular. But that is due to several reasons. Opera wasn’t a free browser until September 2005. If you wanted it for free, you needed to live with the advertisements. This was an unwanted burden for many people, despite the browsers’ qualities. Moreover, there is of course the chicken and egg story. Many people didn’t use Opera since it wasn’t supported on sites and developers didn’t support Opera since not many people used it.

It is time that SAP starts paying attention to this browser. I’m thinking more specifically about Web Dynpro. When I look at the benefits of Web Dynpro, I see on page 6 of this document that with Web Dynpro one can “Achieve Independence from platform and from UI technology” and the word “Multi device internet”. How is SAP planning to achieve this when only MIE6 and Firefox are the greatest common denominators? Internet explorer 6 is Windows only and Firefox doesn’t run on mobile devices. The only real solution for Web Dynpro is Opera support as it runs on Windows, Mac OS X, Solaris, FreeBSD and GNU/Linux systems. It is the major player when it comes to mobile phones, smart phones and PDAs (Personal Digital Assistants). Even interactive television hasn’t been left out in the cold.
And yes, one can’t support everything. I’ve mentioned myself multiple times that this is very difficult indeed. Nevertheless, Opera is, from multiple points of view, too important to ignore or neglect.