Follow RSS feed Like
0 Likes 9,006 Views 33 Comments
The problem is very simple: how do you smartly stop an XI graphical mapping?
Suppose you volountarily want a graphical mapping step to fail based on certain conditions. You would throw an exception in a UDF (User Defined Function), yes, but XI doesn’t allow you to add the throws clause in a UDF, so no way. Another easy way is to write a statement that will 100% fail, like:


This would crash in a StringIndexOutOfBounds exception, the message would stop, but if you use this technique several times in your mapping, it’s a nightmare – if even possible – to understand where it was exactly generated!
So writing a couple of Java classes, and importing a .jar file in Integration Repository as Imported Archive can easily solve the problem.
Step by step, here’s what you need to do.

Create a java package with two classes inside: CustomMappingException and ExceptionThrower. Compile and export them as .jar file. Source code is below.

Note that the key of everything is to extend RuntimeException, and not Exception. Why? Because Java syntax check doesn’t allow you to call a method throwing an Exception without surrounding it with a try catch. While our method- in this case the static ExceptionThrower.fire() – throws a RuntimeException, for which you can omit the try catch.

Once you have created the Imported Archive containing the two classe, you can build up a UDF that will use it, as shown in the picture below. 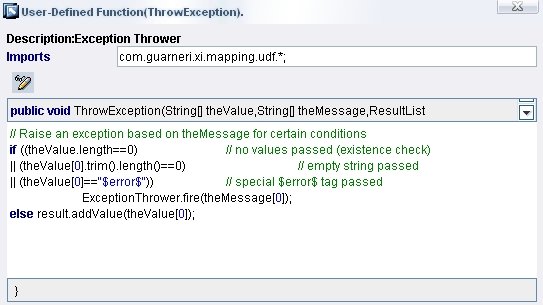 The choices upon which the UDF should hang the whole mapping are up to you. I chose to handle this three kind of problems:
– no incoming value
– empty incoming value
– forced exception, that is if you pass $error$ as first UDF argument
– otherwise the incoming value is returned, and the mapping happily continues its job.

Here’s a sample mapping, where the first argument is the incoming value, and the second is a constant containing the Exception message (“No SalesOrderNumber was requested” here).

And now, the magic: in the Message Monitor (SXMB_MONI transaction) a qualified exception is reported!

If I were an XI day-by-day Admin, I would be pleased by such an option. 🙂