Best Practices for Running the NWDI

The current NWDI landscape has grown out of the need to combine an existing production environment for Java development with the new component model concept supported by NWDI.

This paper contains recommendations about the setup of tracks, track landscapes, and development processes; these guidelines have been found useful and reliable for the software production at SAP.

The concepts presented here are documented in detail in the SAP Library for SAP NetWeaver (http://help.sap.com -> SAP NetWeaver Development Infrastructure).

Only use one NWDI for the development of multiple releases of software components (SCs).

Setup of Tracks and Runtime Systems

Track for Development of a New Release

One track is sufficient for the development of one release of a software component. It offers the complete production environment for all phases of development including the quality assurance steps that guarantee high quality software. The track itself is simply a logical container for organizing the development process in a structured way. 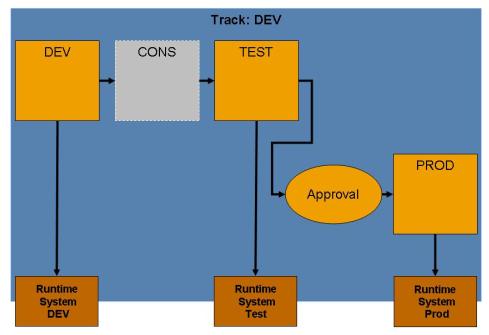 Recommended Use of Runtime Systems in a Track

Since the Change Management Service (CMS) of the NWDI enables you to attach up to four runtime systems to a track – one for each state of the software – the following use of runtime systems has proven itself as most effective.

Organization of the Development Process

The development cycles at SAP are managed in milestones and phases.

Milestones are software versions for which a certain set of software features must be developed.

Phases are the time periods in which the specific tasks for the milestone are carried out, for example, development, testing, and integration tests (MIT).

After the development and test phase the software state is released and transported into the consolidation system, thereby performing a source code split.

Corrections to the production state are done in the consolidation system (CONS) and are transported back to the development system.

The developers develop and test their new functionality in the local Developer Workplace. This consists of an SAP NetWeaver Developer Studio and a locally installed J2EE Engine. After the local tests, the developers check in and activate their changes. This triggers the central build in the Component Build Service (CBS) of the NWDI and the results of this build are deployed in the runtime system of the development location.

The runtime system DEV of the development location is the first environment for integration tests of changes from different developers.

After successful tests in the test system, the milestone is handed over to the production team that needs to approve it (Approval).

The production team defines and publishes a schedule specifying when the new milestones will be deployed.

Restrictions of the “Single Track Setup” Development and maintenance within one track are only possible as long as the production state and the development state are based on the same Support Package level of the SCs which are not developed in the track.

As soon as you want to start development based on a new Support Package and still retain the production system, you need to set up a maintenance track as described in Advanced Landscapes.

Tracks for the Maintenance of a Release

For a detailed description of the maintenance scenario, see the SAP NetWeaver library: (http://help.sap.com -> … -> Application Maintenance with the NWDI)

How to work with back transports

After a software version has been deployed in the production system, you are confronted with the problem that you need to patch the production state, while at the same time you are developing new functionality in the development location. To avoid double maintenance of these corrections, they are transported automatically to the development location if a repair connection is configured between the tracks.

The following procedure outlines the back transport process for the developers:

(For information about the setup of production tracks, see (http://help.sap.com -> … -> Automated Deployment into Multiple Production Systems) 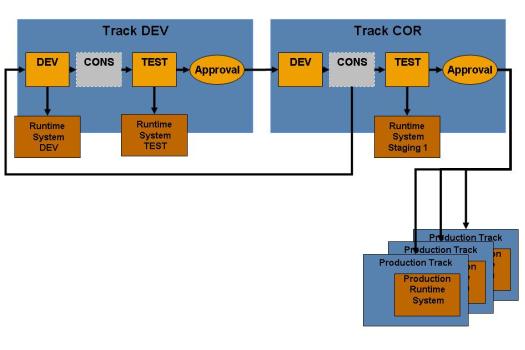