Message splitting and mapping of one source message to more than one target messages is required at many times. Some typical scenario is that we have a element in input message and based on the value of that element, a node of the input has to be mapped to one of the output message types.

Now consider this scenario. The input message is as follows.

Based on the value of the element(name), the node of input(details)should be directed to one of the two message types.

Create the Message Interfaces and also the corresponding Abstract Interfaces to work with BPM.

Message Mapping is very crucial. We have to map single source Message Type to Two Target Message Types. Click on the Messages tab in the Mapping Editor and choose the messages that are involved in the mapping both at the source and at the target side.

Once this is done we can see the set of messages involved in the mapping in the graphical editor. We can now perform mapping as usual. I have just used a user defined function that maps every element of the input message type to one of the two output message types based on value of element name.

Create the corresponding Interface Mapping and all the interfaces in involved are abstract. 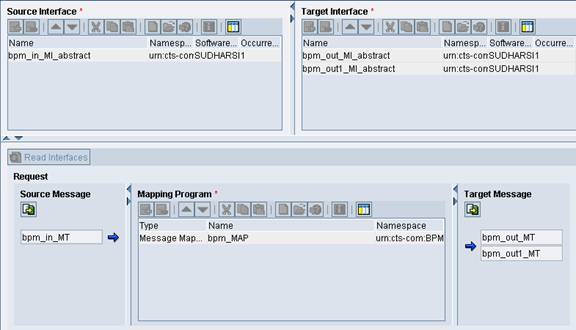 The Mapping or the transformation that we have used requires an Integration Process. Create an integration process.

1. Receive step is invoked after start step which receives the input interface (inputabs) for the input file.

3. A fork steps then branches in to two branches.

A Receiver Determination step returns set of receivers configured for the outputabs interface in the directory and puts it into receiver which is a multiline container receiver element.

A send Step sends the output to the corresponding receiver that is got from the receiver element receiver.

A Receiver Determination step returns set of receiver configured for the outputabs interface in the directory and puts it into receiver1 which is a multiline container receiver element.

A send Step sends the output to the corresponding receiver that is got from the receiver element receiver1.

4. The fork step completes its operation and terminates in to the stop step. 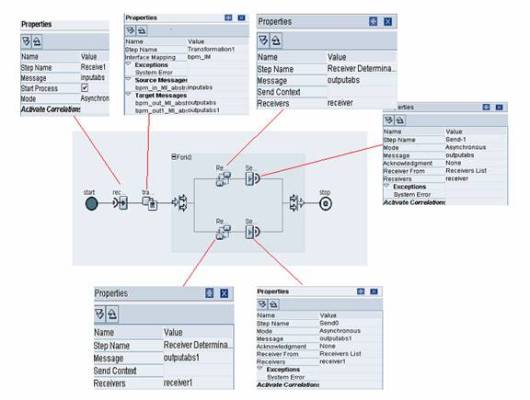 I hope this blog gives you a clear idea how to use BPM in message split.

Former Member
December 19, 2005 at 2:20 am
Sudarshan, Have you tried the 1:n split with the target message occurences as 0..unbounded instead of 1. Ascenario where in we do not know beforehand the number of target messages generated. In ur case , it is always 2 messages i beleive!! I remember trying this sometime back , but did not work . But, in our case target was IDOC and so we could get it to work with IDOC packages.It will be good to know whether it worked in your case ?

Former Member
December 19, 2005 at 4:51 am
Hi Saravana,
I have not tried the scenario that you have quoted.Do you want n different message Types(dynamic)or known(predefined)number of Message Types MTs with varied occurences.So clarify if the n messages are of same type or different. To best of my knowledge i feel that the number of message types must be known in advance and only their occurences may vary.
Regards,
Sudharshan

Very useful blog...I have a requirement to split a single message on key and group the keys together and create rfc for each key group. Can you help?

Could u elaborate ur requirement. As per my understanding u have single message at input and u want to call multiple RFCs at the other end.

If ur RFC call is asynchronous and u have XI SP>15, u can do this with multi mapping without BPM.

Uday Suvvada
November 20, 2008 at 7:52 am
i am getting the following error  when i ahve done this scenario "Permanent error in BPE inbound processing" please help me on this issue

Sanjay Badhai
November 25, 2008 at 11:25 am
I think you need to check "create new transaction" in in the queuethe property otherwise it is getting stuck in the queue.

Uday Suvvada
November 21, 2008 at 6:46 am
Hi Sudhakar,
wheni executed ur code it is showing error " illegal start of expression" .please send me the
correct code.I need it urgently  becoz my requirement is same as you mentioned in the blog.

can u explain me the use of that step

The Receiver determination step explicitly returns the list of receivers Configured for the Integration Process for a Particular Receiver Interface from Directory.You can use this receiver in subsequent Send Step.

I tried FILE 2 File Multimapping Through BPM. i got problem

i.e, FIle is Pickingup from Sender File Adapter and message is entering into the BPM.so, i can able to see the message upto recive step in the BPM but,its showing error in Transfermation Step.

so, wht is the solution for above problem?

Former Member
February 15, 2008 at 6:23 am
Nice blog and clear explanation.
But, as discussed, from PI SP14, 1:N mapping is also possible without BPM.

And instead of UDF in your case, the node function createif with a equalS text function for generating target fields is sufficient.

I don't think this blog really resembles the extensive uses of BPM multi-mapping, rather it is a simple usage case to demonstrate referencing a multi mapping from BPM.

How is it possible to use a send step with receivers from a receiver list that is not inside a block for dynamic processing? I've tried this configuration with your exact settings and 4 different receiver with 2 for each interface, but the outbound message gets stuck inside the BPM with the message "message scheduled on outbound side".. guess we do need blocks..