Just few days remaining for SAP TechEd, other than SDN Clubhouse at SAP TechEd ’05 in Bangalore and meeting Craig, I am also very keen to attend all the educational session, specially Session on “Modeling SAP NetWeaver BI Data with SAP NetWeaver Visual Composer” .

Before having hands on experience on the Visual Composer tool in that session directly, I decided to take some basic idea of that tool’s architecture and functionality. So whatsoever I have learnt, I like to share it with all of you.

How to implement SAP Analytics Applications?

In my previous weblog on SAP Analytics Applications , I discussed some applications in which analytics can be used. As techies it’s also very important for us to know how to implement/use these analytics in the most efficient and easy way.

Very soon SAP is going to launch their new product “SAP NetWeaver Visual Composer (with BI Kit)” tool which helps in implementing analytics in a quick and easier way. The tool is very compatible with SAP NetWeaver Enterprise Portal and shortens the design and deployment life cycle of bringing analytics to the desktop of the end-user.

Visual Composer is a modeling tool used to implement graphical user interface just by dragging and dropping the different elements that we have and then establish different relationships between the objects using just a pointer tool.

The Business Intelligence (BI) Kit which is delivered together with Visual Composer is a tool which gives application developers access to the analytical content both of the SAP BW and of external Systems through BI JDBC, BI SAP Query, BI ODBO, BI XMLA, BW Web Services connectors, and native BW Web Applications.

By using the BI Content Wizard which is also included in Visual Composer users can build new queries in a guided way based on an extensive catalog of templates or on a free query designer.

Macromedia Flex technology is one of the available User Interface technologies which are directly embedded in the Visual Composer tool.

The Flex technology minimizes the number of server roundtrips required by delegating tasks to the client. Communication between different controls on the same page can be implemented locally on the client. This results in more responsive applications that also reduce the load on the network and on the server. 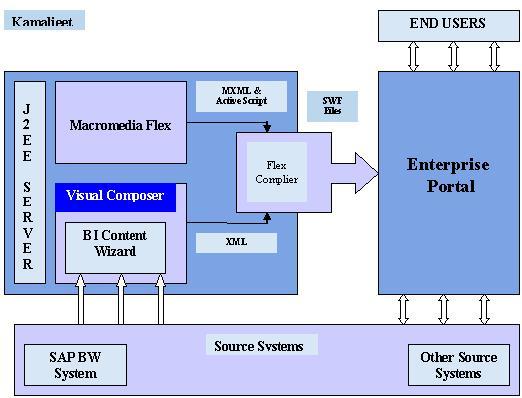 Visual Composer stores models in an XML representation. Once the modeling part is complete, the Visual Composer user decides on the UI technology (Flash-Flex/HTMLB/DHTML/WebDynpro) for generating the actual result.

The Flex programming model is based on the combination of MXML and Action Script. The source code of the Flex application is complied into Flash byte code (SWF file). This allows the Flex application to be delivered to the ubiquitous Flash Player running inside the browser at the client-side using the traditional lightweight, cross-operating system, and cross-browser web deployment model.

The Visual Composer has both an IDE component and a server component.

With SAP NetWeaver Visual Composer, SAP Analytics can improve any business process in an enterprise. SAP Analytics adds a powerful new dimension to ERP. It converts the solution from a simple transactional environment into a platform for greater and smarter decision making.