Several SDN specimens gathered in a clubhouse and grooved with an excellent coffee in their hand.

It happened so fast that I didn’t even have time to think about it. Now it’s all over. And so now it’s maybe a good time for retrospection. By “it” I’m referring to TechEd Vienna of course. Yes – yet another web log about it. No, I won’t be summing up what was said in the sessions and spoil everything. You need to discover that for yourself either at one of the other TechEds or via the TechEd To Go DVD set. I simply want to share my personal, subjective view on things.

It didn’t start off well. I had a really bad cold which I caught from my daughter. The result being that I didn’t sleep (properly) for 4 nights; which isn’t very helpful when one needs to be alert and pay attention during those long days. On top of that I lost my voice, which isn’t handy if one needs to do a Q&A, SDN and BOF session. And it rained cats and dogs the first night. All this didn’t presage well. But enough chit chat, let’s get to the point.

The first night, as a speaker, I had the privilege of having a look behind the scenes at the build up, in my case, of the SDN Clubhouse. The SDN Clubhouse was located near the central event area where Shai would be giving his keynote, the Demo Jam would take place and the party would be launched. The Clubhouse is/was much improved compared to the one at TechEd Munich last year. It was a lovely open area with 4 mini theatres in the corners and excellent coffee served in the middle. 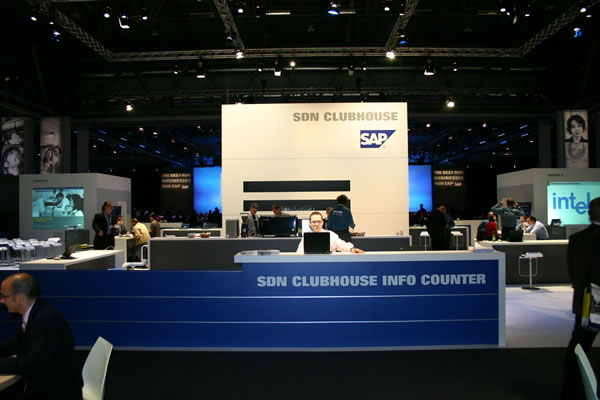 TechEd starts, of course, with Shai’s keynote speech. Last week I attended the Belgian Sap User Group (SAPience) where the subject was also ESA. It was explained in such a clear, unambiguous manner that everybody could understand it, and could even explain it to their partner. Shai focussed on how to deal with ESA in practice. His explanations were so clear that I had no difficulty in communicating them to my 6 year old son. Details are of course available at SDN. The end of the speech was the start of another 2,5 days of excitement. Or, better said, it should have been. There were a few minor details at this year’s edition that were perhaps less than perfect. One of these details was the handouts, or rather, the lack of them. If one didn’t arrive at a session a good half hour before the start of the session there were no handouts left. Not that the sessions were attended by an extraordinarily massive number of people (there was plenty of room to provide everybody with a seat). No, it was simply that only a small amount of handouts had been foreseen. The result was that only 50-60% of the attendees could get hold of the handouts. Of course, the slides will all be available later, but that isn’t very helpful when one wants to make notes about the things that are said during the session itself.

Another detail is the fact that 2004 is kind of a “small” upgrade. This means that there aren’t that many spectacular changes. The side effect is that some sessions turned out to be rather like déjà vu, certainly when one could find all the info on SDN itself already. Speaking of SDN, I was rather disappointed by you the SDN community. I expected more commitment from you guys. The SDN team (and that’s not only Mark and Craig) put a lot of effort into setting up an attractive programme in a nice clubhouse. The response was sometimes rather poor. Sure there were plenty of people when there was nothing else to do or when there were things to give away. However the clubhouse was sometimes practically empty during sessions, even though there were equally interesting things going on there. I know, you paid a lot for TechEd itself to attend the sessions and you want value for money, but who says that you can’t get it at the SDN Clubhouse? You can’t tell me that none of you could spare 15-20 mins. during the three days to come and visit the SDN Clubhouse. 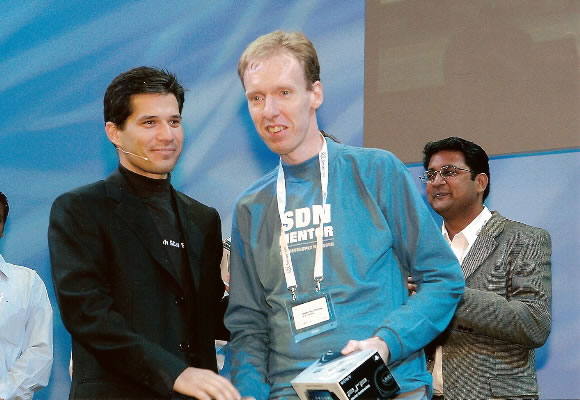 Enough negativism – I need to comply with my self claimed aura of an old grumpy man. Show the outside world that the SDN community is the place to be. You’ve still got two TechEds to prove this. The same goes for contributions. Why should we always have to rely on the usual suspects? Contribute. Fresh blood with new ideas makes this vibrant community work. It’s really easy. At Teched 04, I had only 12 points. Next year it could be you standing on the big podium shaking hands with Shai, you even get a prize for it.

Former Member
September 26, 2005 at 3:26 am
From 12 points to 7990 points in a year is really a great feat. You can easily find him wandering over all the forums most of the time, and remianing time i think he gives to think about SDN, which finally come up in the form of Blogs.

My best of luck to him, to be on the TOP by the next TechEd.