Walmart stocks shelves of baby diapers and guess what do they stock in the neighbouring shelves? Cans of beer!!!!! You know why, fathers who come to purchase diapers for their kids, invariably take up some cans of beer on the job. How did they arrive at this unique combination? Well read on…

One day I went to one of the premier grocery stores of the town to purchase milk and some other products of daily eatables like a few packets of noodles, and some other items from the store. I started with the shelf of Milk, coincidently I found the next shelf was storing bread, I thought why not buy bread too, bread with milk finding my tastes as a power breakfast to kick start my day. Then I went to the shelf for noodles, again on a near by shelf I found a good combination which a can make with noodles, this time it was tomato ketchup. Again I took both the items. Probably a canned juice would end the breakfast in a better manner? But this time it was non on any near by shelf, still I found it, and also took it with me. I also took rest of items which I had decided in advance.

Now, the time is to pay at bill counter. It was the discount season and I found a long queue at the counter. This nosy habit of mine is going to die hard, so while waiting in a long queue, my eyes were rooming around other people’s purchases. The person standing next to me has nearly the same combination of items ad I have. I thought it may be a coincidence, but when I started analyzing all the other shopping carts, I found almost all of them have similiar combinations as I. Being a techie, the habit of logical reasoning does not leave you even outside the office, or does it? Was it just a coincidence or something more than that? The owner of the store is using some tool for analyzing the purchase pattern of customers habits and he designed his store in that way. Having a little idea about a few data mining tools, I was really curious to know which tool they were using. Putting into use some of my persuasive prowers, I cajoled the shop manager to “spill his beans” and to give me an idea of the system they were using in their store; then came the moment of truth (I guess that’s what they call it in management jargon?) It was really astonishing moment for me to know that they were using SAP R/3 with some third party tool for data mining analysis. But customer comes first, right!! So without further wasting his time, he preferred to tend to the growing queue. I left the store with a lingering query in my mind as to why was the shop not using the SAP BW? With this unanswered question in my mind, I lay the matters to rest.

Last month I went to SAP NetWeaver tour ’05 . I attended a small session on BI by Sindhu Gangadharan, SAP AG, she was trying to emphasis more on APD (Analysis Process Desinger) part, through out the presentation. Having little understanding on SAP BW, I started giving some of my spare time to the study of APD, Data Mining tools. Finally I implemented a few small applications on the basis of these tools.

In this weblog I am going to demonstrate a flow diagram of APD application based on the above scenario I discussed. 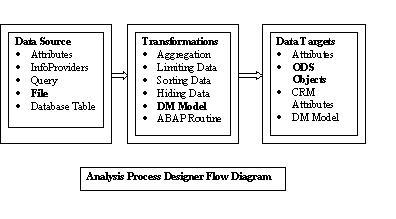 I will use Data Source as a File, in which I will take simple transaction data of the grocery store. For transformation I will use Association as a Data Mining Model. I will create a Data Mining model using the Data Mining tool available with SAP BI. Finally I will populate my results in a ODS Object. The result will come in the form of clusters, where I can check for the Grocery Store Items which can be placed in a close proximity.

We have various other options available for Data Source in APD, I will use a file just for demonstration purpose. If you are analyzing an already existing BW system the proposed Data Source is Infocube and if we are trying to fetch data from any database, we can go for a database table. Other Options such as attributes of characteristics and BEx Query can also be used.

For storing the Result I will use ODS Objects, as my output is a simple relational one, storing similar clustered items in each row of the field.

The discovery of such associations can help retailers develop marketing strategies by discovering which items are frequently purchased together by customers. Such information can lead to increased sales by helping retailers do selective marketing and plan their shelf space. For example, placing milk and bread within close proximity may further encourage the sale of these items together within single visits to the store.

Former Member
February 6, 2008 at 4:31 pm
Hi Kamaljeet,
Nice one!!So BTW,APD is where we can get source frm one place.Data is reflected automatically...
I would like in detail about Data mining..
Can u xplain??