In last week’s demo jam session at the “SDN meet labs” in Germany programmers got a sneak preview of the new ABAP editor. For all who were not able to join this live session I present some screenshots here.

But first I would like to make some statements on the release plan (regarding the current discussion on SDN this may disappoint some people).

Even though the new control will be part of a 6.40 GUI patch to be released within the next few weeks, the editor is not just a frontend game. The editor can only be enabled within se80 on a 7.00 backend release (that will be SAP NetWeaver 2004s).

Also there is some confusion in the discussions here about the feature set. Alas, like with everything, the most valuable features, in particular code completion, will be available last.

Although sophisticated features like code completion – well known from other IDEs – are not available yet, the new editor will already bring a lot of improvement over the current se80 control of today.

The screenshot below shows some of these benefits like syntax highlighting and collapsing of blocks.

The syntax highlighting is done by a light-weight version of the ABAP compiler that runs asynchronously in a background thread of the editor. Because keywords are not reserved in ABAP it must have profound knowledge about the syntax of the language. Therefore it can easily display structural errors. In the above screen shot the keyword VALUE is misspelled and thus shown in red color to mark it as erroneous.

In future releases most of the syntax errors will be displayed in real time in the editor without explicit compilation of the source code at the backend. Also very helpful are code templates which allow convenient insertion of user defined code. The next screen shot gives some idea on how it works.

Now the programmer can choose to insert some user defined code template for a form routine automatically. The templates can be managed easily as shown in the next screen shot.

Besides these features focussing on editing source code you will find a rich feature set of useful text editing functionality. Among these are clipboard ring, block text selection, multiple clipboard formats, incremental search, bookmarks, auto indent, auto correction, and printing. The editor will also be used by the debugger for displaying code. The next screen shot shows a sample debugging session. 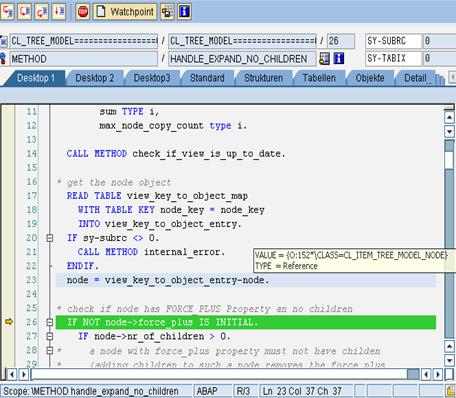 As you might notice in the last screen shot, type information for variables is already available in the debugger. For the debugger this is an easy game because it displays only code that has already been compiled. As mentioned before we are looking forward to providing this kind of information for editing code as well.

The new editor introduces many features into the ABAP world that programmers have been missing sorely for a long time. It is my hope that programming ABAP will be a lot more fun using this tool so that it will help to increase efficiency in the development process.

Former Member
April 25, 2005 at 7:55 am
Thanks for this information.  I'll be happy to get the syntax highlighting for now.

I've not heard of NetWeaver 2004s before. SDN and Google search didn't help much.  Can anyone point me to more information on what this NetWeaver release is?

I downloaded and installed the SAPGUI for windows 640 patch 9, but didn't see any difference, however I even tried on WAS 6.40.
I wasn't there, so I'm not sure if it should work or not at all unless I connect to WAS 7.00.

Any info about this?

but that's what Björn is telling: you need an
ABAP Application Server 7.0 (SAPNetWeaver 2004s) in order to work with the new editor. Its not a pure GUI development!

PS: I can already use the new editor - and I love it!

Thanks for the confirmation.

I just installed SAP GUI 640 patch 10, and it created a folder ( c:\Program Files\SAP\FrontEnd\SapGui\ab4_data\ ) for the new abap editor and an interesting 'Quick Introduction' file.
There is a link for a Power Point presentation link ( \\pwdf1018\d031288\ab4\docs\AB4%20Presentation%202%20(SAP).ppt ) .
Is it possible to make this file available in SDN?
Or it's restriced only for some lucky insiders? 🙂

Thanks in advance,
Peter

if you will be so kind, to describe me how I can make this, I will do it with a pleasure :).

But I think to start working, it will be more usefull the feature list, because it contains more detailed info.

Thanks for your reply.
Your name looked familiar, just realized that I saw it in the xml files...eg bsp_spec.xml
Unfortuantely I never shared docs in SDN...I just demand it from the others....you know, I'm one of the annoying-kind of guy:-))))
However I'd try via 'Submit Content' in the right/top corner...eg as 'Technical Article'.

Thanks in advance,
Peter

maybe you will find this name also somewhere in the editor or settings or in presentations because I have wroted the AB4 editor :))

Marilyn Pratt
June 28, 2005 at 12:42 pm
Take heart!
Alexey has been generous enough to share his wonderful presentation materials which we will shortly make available to SDN.
Coming soon to the Technology and ABAP pages!
Thanks Alexey 😉

It's already available if I use the search engine with keyword 'AB4'.

I have posted the documents as Technical Articles to SDN, and as I have understand now they should be reviewed and only then will appear ... somewhere.
So lets wait :).

Thanks a lot for your help!!!
So far the Advanced search didn't find it, but I hope it will be available soon.

Former Member
May 31, 2007 at 2:07 am
Is it just me or has anyone else noticed the new editor seems to continually use up more and more memory and is quite CPU hungry?  (I am running Vista though!)

It has rendered it unusable for me, which is a shame as I really like it.