As mentioned in other blogs from TechEd, a very impressive live demo was done of a new technology SAP labs has developed; SAP VM Container.

This weblog will hopefully give you more insight into this product and is based on publicly available information I have found. Note that this is not official information from SAP, and it is very possible that I am drawing all the wrong conclusions.
Update 16.11: Please read the excellent official documentation from SAP Labs
Update 26.10: Got an email from someone at SAP Labs working with the Technology saying that they couldn’t find any mistakes in the blog

For those you who have not attended TechEd this year, I will give a quick recap of the live demo done by Harald Kuck.

The actual application which was shown was a slightly modified version of the Petstore application (which is famous for being used as the comparison of Java and C#). The changes made to the application was that you could cause the application to go into an infinite loop, or crash the Java VM. For some odd reason this wasn’t included in the original version.

Three simple webclients were shown which accessed the some part of the application, and basically incremented a session value with one for each call. The webclients looked like vb programs. While the webclients were calling the same function once every other second, a browser session was launched against the browser.

The first function tried in the browser session was the infinite loop. The infinite loop resulted in that the browser was waiting in vain for the server to respond. While we were watching this, Harald attached a debugger to the browser session and started debugging the problem while all the other webclients were running as normal. The loop problem was resolved in the debugger and the browser got the response from the server. The fact that you could debug the request of one user whilst leaving the others in peace was truly impressive. However, in a real production environment you have to ask how big of an overhead are you willing to have in order to be able to debug user processes.

The second function tried in the browser session was the Java VM crash. As expected the browser session just gave an error message, but the other webclients continued running. Normally, when a JVM crashes, it will take down the whole JVM, thereby affecting all users session and batch jobs being processed in it. Also, the JVM was restarted immediately in a blistering 132 ms!

All in all a very impressive demo, at least for people familiar with java.

Being impressed by the demo, and seeing implications far outside SAP Netweaver, I set out to find out more about it. The first thing I did was to do some searches on news.google.com. This gave some hits on information recently released to the press about it.

Not much technical information, but there are two important facts learned:

At the same time I also found this blog entry from 8 July this year which points to the fact that SAP are looking for JVM developers (the job ad is pulled now).

The paper defines Process Attachable Virtual Machines(PAVM) as “a VM that can be attached to and detached from OS processes at very low cost”. In order to achieve this, there needs to be a separating layer between the OS and the JVM and it is here the major work is done by SAP.

The SAP VM container uses shared memory in order to create, attach and detach PAVMs. Each PAVM will get its own private part of the shared memory, which is used to contain the heap and stack for the user. The paper also focuses on the aspect of being able to quickly transitioning to and from persistent state. This seems to indicate that the SAP VM container will contains very many PAVMs contained, but very few will be active at the same time. Still it is expected that all the PAVMs are in the shared memory at the same time, so these PAVMs need to be very lightweight.

The SAP VM container is not suitable for all applications that are using java, but is particularly well suited for applications where many users share the same JVM.

The overhead of initializing a new PAVM is rather expensive, but as mentioned at TechEd, this can be avoided by copying the session memory of an allready initialized “master” PAVM. The “master” is initialized when the application starts.

This paper references to JSR 121: Application Isolation API Specification which I decided to look closer at.

Java Specification Request 121 is an attempt to specify a java API for how to run independent programs in the same java runtime environment and how communication between them can be done. Each independent program is run inside an isolate, which in SAP’s is implemented as a PAVM. The document “Isolates: A New Approach to Multi-Programming in Java Platforms”[pdf] by Ciaran Bryce gives a very good introduction to isolates and the motivation behind them.

Some key points are:

SAP’s Norbert Kuck is a member of the JSR121 expert group and I would expect that SAP’s VM container will influence and implement the JSR 121.

At the moment there seems to be three different implementations of the extensions to the java runtime environment needed in order to support the JSR 121 public review version:

More information on JSR 121 can be found on http://bitser.net/isolate-interest/

After an inquiry from myself, I also got an email from someone at SAP labs. They said that they are working on documentation to be released outside SAP (I probably need the heavily revise this weblog after it is released). SAP have licensed the source code of an existing JVM, and most changes to it is done in the interface between the SAP VM container and the JVM. What this basically means, is that you cannot plug in any JVM into the container, it needs to be modified first.

I hope you have learned something about SAP’s exciting new technology and hopefully most of the information is rather accurate. I would like to stress once more that this information is not official in anyway, it’s rather what I made out of the material available.

I expect that there will be some “what’s the big deal? we’ve had this in ABAP for years” thoughts, but coming from the java world this has actually a big impact.

Following the logic of Shai’s keynote, SAP might get 6 months or a year’s advantage of competitors on this technology, but then it will become a standard for all JVMs. Who knows, after a while we might be back were we started with one OS process pr java runtime environment (but maybe with better OS support and shared memory handling). 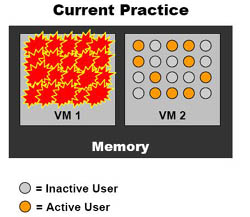 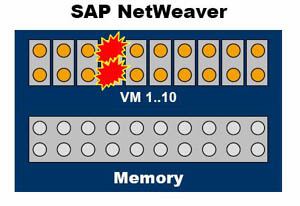 Pankaj Kumar
October 24, 2004 at 9:45 am
Thanks Dagfinn for sharing the information and taking time to explain this in a very lucid way.

I find that when I write blogs, I actually learn the stuff I am writing about much better.

Helmut Tammen
October 25, 2004 at 10:15 am
Just a few days ago we had a the situation that one application killed the whole VM.
Good to hear that this problem will be solved in near future.

Former Member
October 26, 2004 at 2:18 am
During the migration process problems have been reported for this blog. The blog content may look corrupt due to not supported HTML code on this platform. Please adjust the blog content manually before moving it to an official community.

Former Member
October 29, 2004 at 11:47 am
During the migration process problems have been reported for this blog. The blog content may look corrupt due to not supported HTML code on this platform. Please adjust the blog content manually before moving it to an official community.