What do Gutenberg, XML and PDF have in common?

0 0 80
This is my first blog posting which I write on paper. Half an hour ago my laptop greeted me with a blue screen of death while booting, so I am using this forced spare time to write a long overdue blog entry with pen on paper. So actually I am not writing with a regular pen but a Logitech Digital Pen, which has a little camera built in to record my strokes while writing on a special dotted paper. So if everything works out later on (when my computer is fixed) I will be able to transmit these notes to my laptop and then just post it to SDN.

But enough about my computer problems; lets move on to the main topic. A couple of weeks ago I visited the Gutenberg Museum in Mainz, Germany. If you are ever in that region, I can highly recommend you visit the museum. Gutenberg’s invention of the movable type in the 1450’s is clearly one of the most significant inventions in our history. While marveling at the early printing presses and his first books, I realized that there are really two important factors to Gutenberg’s work: A highly efficient mechanism to create and multiply content and an improved way to present the content. The design of types and the layout of the pages was to Gutenberg as important as the print mechanics itself. We face a similar challenge with today’s business applications. During the last ten years two significant technologies have been evolving in parallel. On the one hand the communication of data between applications using XML; on the other hand the presentation of content in a rich device-independent layout with PDF. While business application development tends to focus on the business logic and content (the business data), for creative professionals the presentation of content is key. But as Gutenberg already recognized, both content and presentation are equally important. The content of documents in the business world needs to be easily accessible to applications, but also easily accessible and usable by humans.

Adobe’s answer to this challenge is to merge PDF and XML. Today you can include XML data in a PDF document or include the PDF data into an XML document (XDP format). Both documents can be opened by the free Adobe Reader. There are two XML constructs which are especially relevant to PDF documents: XMP and XFA. XMP (eXtensible Metadata Platform) allows to incorporate metadata, like author, title, subject and, creation date, into the PDF document. This can be leveraged for indexing and searching. XFA (XML Forms Architecture) describes the layout and properties of a form template. Form fields described in the XFA can be bound to an XML data file (which can be based on any XML schema) for a specific form.

The Adobe LiveCycle Designer, which is integrated in the SAP NetWeaver Developer Studio and the ABAP Workbench, allows you to easily design forms. As you can see in the screenshots, the form templates which you visually design are actually stored in XFA format. 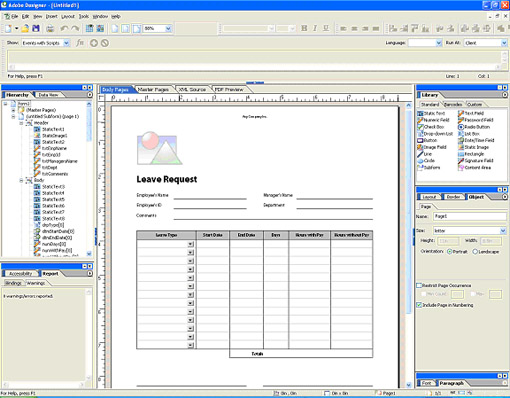 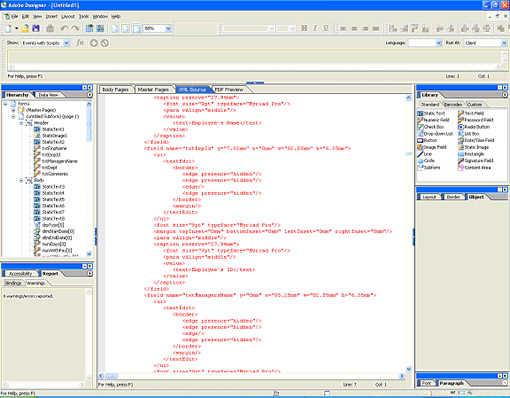 So with Interactive Forms based on Adobe software in SAP Web AS 6.40 you can have both: The rich presentation with precise layout, graphics and fonts of PDF in combination with business data and metadata which can be processed by your applications in XML. Additionally, you leverage the ubiquity of the Adobe Reader and its capability to handle forms offline and print them exactly the way you see them on the screen.

By the way… The first feature of SDN TV online is about Interactive Forms, so make sure you tune in.