You dont need to use SOAP to keep your RPC clean …

Clean RPC without SOAP or XML-RPC?

No doubt a number of you have read DJ Adams’ article Real Web Services with REST and ICF, which discusses how to create real Web Services using the ICF, REST and the power of the HTTP protocol. I wanted to explore this a bit more, and show how to create your very own generic RPC mechanism for R3, without having to use SOAP, or XML-RFC, but still use widely available Open standards, while borrowing from RESTian principles.

I just don’t buy into really complicated things, these days.
I don’t like them – I feel it best to at least try and keep life simple, so the warning bells are immediately triggered when I find that I have to spend more than a few hours getting my head round a new subject area. For me – SOAP is one of those things, especially when it comes to RPC.
I want a simple RPC mechanism. I want to use HTTP as the transport protocol, but I am interested in the possible application of the RESTian concept of broadening the use of HTTP into the application level protocol (OK – bad word) of RPC. To me, SOAP hides the identity of the application within the payload, and I wanted to bring this back out into the URI (open), where I can see it (a good policy with your enemies :-). SOAP mixes the error handling of the application, with the error handling of the transport protocol (typically it throws a 500, with a fault document, essentially duplicating information yet not giving anything useful at the HTTP layer), but I wanted to separate this between what is a generic error (application not found 404, payload is corrupted 400, if an unhandled exception occurs in the WebAS then a 500 is issued, etc), and what is an application specific error (EXCEPTIONS in the result document with a 200 OK returned). The benefits of this are quite substantial, as it enables client applications to glean quite a bit of information about where a problem lies eg. is it a transport problem, a generic RPC request format error, an authorisation issue etc., without actually having to unpack the response to do it.

The solution that I have in mind is to use the WebAS and HTTP as the transport protocol, identify the application as the RFC name on the URI, and to represent the RPC interface parameters in YAML.

YAML vs the SOAP Envelope or XML-RPC payload

YAML vs SOAP or XML-RPC is more like – encoding vs serialisation.
RPC doesn’t need to have encoding, it just needs some form of serialisation, a well defined contract between the two players (client and server), and a format for data exchange between systems, or programming languages – not necessarily a mechanism for deriving/delivering semantic meaning ie. an encoding, as this is allready defined by the contract between the partners.
For this reason SOAP, via XML seems over engineered to me, before you even start looking at the cling-ons of WSDL, UDDI, etc.

“Whats the benefit”, you say

This is very true – it isn’t new, and it is reinventing things that already exist, but there can be good reasons for doing that.

one of the reasons I chose YAML for this experiment, is because there is broad ranging support for it across programming languages, and platforms. There are currently library implementations for C, Perl, Ruby, and Python (that list maybe incomplete), and as you can see from my handler described below, it wasn’t exactly difficult to implement a coarse de-serialiser in ABAP. This could be true of any number of other serialisation formats such as:

It is up to you to decide what suits your own environment.

Back to my implementation

The service is configured through R/3 transaction SICF, and my config looks like: 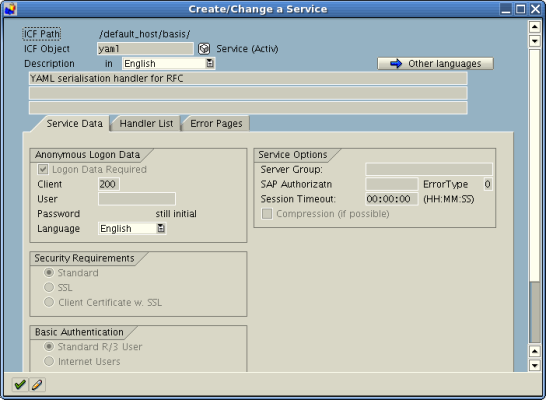 I have written a small program in Perl to act as the client. It looks like this
It runs like this: 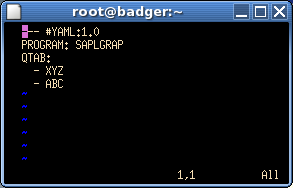 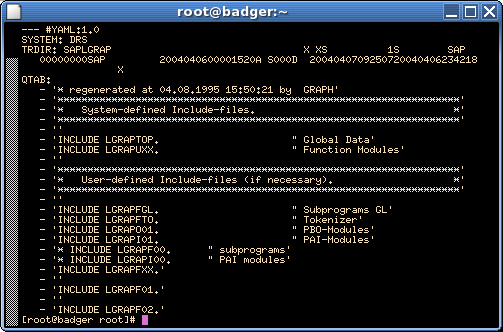 Having a closer look at the request/response cycle, the HTTP request looks like this:

You can see that the PATH_INFO of the URI asks for a specific application (Function Module) to run, and the request body contains the serialised list of parameters.

The response contains the serialised list of exporting parameters, and tables.

The RFC_READ_REPORT example is the simplest of forms. There are no complex values, such as structured import parameters, or tables, after all – it is my version of “Hello World”, for RFC.

For a slightly more complex example, I have RFC_READ_TABLE. It allows us to select rows from an arbitrarily named table, limit the rows selected, and pass options directly to the SQL WHERE clause. Again, the application is identified through the URI, so that becomes http://seahorse.local.net:8000/basis/yaml/RFC_READ_TABLE,and so my serialised input parameters look like:

Stepping back a bit – what I have shown is a generic framework for doing arbitrary FM calls (you could call ANY FM in R/3 – not just RFCs), and you could use any serialisation/deserialisation mechanism you like.
SAP have just made it possible by providing the engine that runs the RPC (just look at the ABAP help for CALL FUNCTION and the options for Dynamic parameter passing), and the transport mechanism (WebAS) to carry it.
There is nothing written anywhere that says when you want to have interoperability that you have to use SOAP (or XML-RPC), or even XML to achieve it. I hope I have proven this through the use of open, and easily accessable standards, that have wide acceptance across the various programming language communities, and (by this virtue) the tools to support it.

The environment I used for developing this was: