While waiting for the DD ACTIVATION phase of an add-on installation to finish, my mind wandered off to something I’d noticed with my new WAS 6.40 testdrive for Linux is here! system, with the SID “NW4” (NetWeaver ’04). Normally, when you start transaction OSS1, and hit the button to connect to OSS, you’re presented with a popup giving you a choice of groups, like the one in the screenshot here. 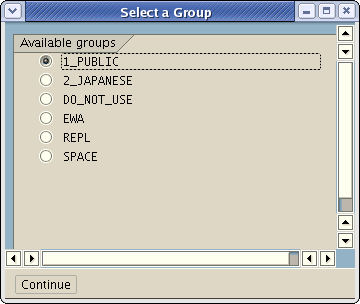 But it wasn’t happening from my NW4 system. So I rolled up my sleeves, and wielded the mighty “/h” in the ok-code (in the R/2 days we used to call this “hobble mode” :-), cleaving my way into the ABAP that lay beneath OSS1. What I found was quite interesting.

There’s a command-line program called lgtst that can be used to query the message server of an SAP system and have information on logon groups and so on returned. This lgtst program is not, apparently, supported on all operating systems, so there’s a condition in the ABAP that checks that.

If the server’s operating system is not supported, then a simple logon string is constructed from the technical settings held in OSS1 (menu path Parameter -> Technical settings). For example, if you specify a SAProuter at your site thus:

then the route string constructed is just the concatenated saprouters leading to the dispatcher at O01’s ’01’ instance, like this:

This route string is then used in conjunction with a direct local call to your SAPGUI client, so that the end result is that a new SAPGUI instance is started for that connection.

So far, so good (or not, depending on your luck with SAProuter routing :-).

On the other hand, if the server’s operating system is supported, then something rather different happens. In this case, the lgtst program is executed on the server, to discover what logon groups are available for OSS. How does this happen? Well, the SAProuter information we’ve already seen is used to construct a route string:

but, instead of pointing to a dispatcher at the SAP OSS end:

Once this route string has been constructed, it’s used in a call to lgtst like this:

This is basically requesting that the message server for O01 send back information on available servers (instances) and logon groups. A typical reply looks like this:

What we’re interested in are the lines in the second half of the output – the list of selectable logon groups. The key data items here are the group names themselves (e.g. 1_PUBLIC), the IP addresses (e.g. 147.204.100.40), and the port numbers (e.g. 3201). The ABAP behind transaction OSS1 receives this lgtst output and parses it out into a nice list of groups, which it then presents to the user as shown in the screenshot above.

(And it goes almost without saying that if the call to lgtst fails, we get that friendly message “Unable to connect to message server (default connection will be used)” and revert back to the direct SAPGUI call).

So that’s where this popup comes from. Ok. Now I understand. It’s amazing how you use a transaction for years and never really look into how it actually works.

So, just to get back to why I came here in the first place – why doesn’t this popup appear in NW4? NW4 is a Linux-based testdrive system. lgtst works fine. But look at this:

No Linux? Hmm, I soon fixed that, by copying the transaction (OSS1 -> ZSS1) and the ABAP behind OSS1 (RSEFA910), adding a line to this IF statement to bring a bit of love the choice operating system of a “Gnu generation” 😉

Now I can call ZSS1 and delight in the group logon popup. Hurrah!

Former Member
June 1, 2004 at 6:36 am
I checked our CSS system to see if there were any OSS notes or customer messages identifying the a similiar issue.  So far there have not been any.  This may not just be an issue that is isolated to the Testdrive version but may in fact affect the NW04 ramp up version as well.  It might be worth it to submit this problem to the linuxlab listserv.

Former Member
June 3, 2004 at 1:37 am
Hi,
when we got Linux-Application-Servers we had the same problem. I created a Oss-Message and got the Oss-Note 682083 as answer.
Regards Johannes

Christopher Solomon
June 8, 2004 at 1:04 pm
DJ, I always look forward to your weBLOGs. Very interesting. I bet when you were young, you wore your folks out with "...but why?...but why?". haha Thanks again!

By accident I overwrote DJ's excellent Weblog. It took us a couple of days to get it back.

Unfortunately now it looks like it was created today, which it wasn't.

Sorry for the confusion, Mark.

Former Member
June 29, 2004 at 9:18 am
Hi Mark,
thanks for the hint! This stopped me right now wondering about an overwhelming feeling of familarity with this article called déjà vu 😉
Regards, Stefan