There are angels on SDN :D

Follow RSS feed Like
0 Likes 59 Views 4 Comments
There are times when you read something and it makes your days. A recent FOSDEM, and small OSS Notes Browser Hack by DJ Adams was such a thing. He mentioned how he has made a small hack to read SAP Notes in an effective manner.

He did it on the Galeon browser which is available on Linux. But unlike gods us mere mortals use windows. So I couldn’t make that Smart Links thing in my browser. Now I have been using Firefox a lean and mean son of mozilla project for quite some time. So I thought there should be way to do this in firefox as it would classify as cousin of galeon. While tinkering along with Firefox I noticed there is Google Search text field in the top right corner, where if I put text it does the search for that text on google. So if I could make something exactly like that.

Google Search functionality in firefox is implemented in a directory called search plugins which had a small text file google.src and the 16×16 gif image of google to show in the text field. Now it was easy, all I had to do was to create a similar file for SAP Notes search and may be a small gif file. Here is the camplete text of my sap.src file

For added punch I downloaded the favicon.ico of sap.com and saved it as sap.gif in the same directory. Voila I have some thing similar to what DJ Adams mentioned. See the image below. 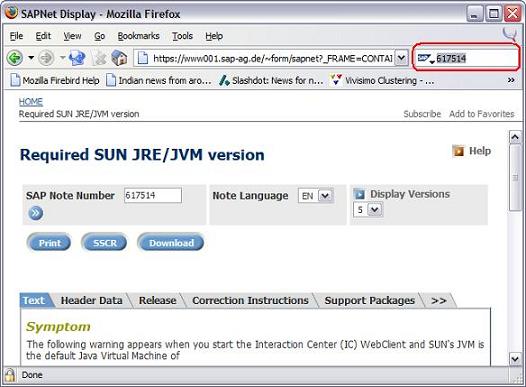